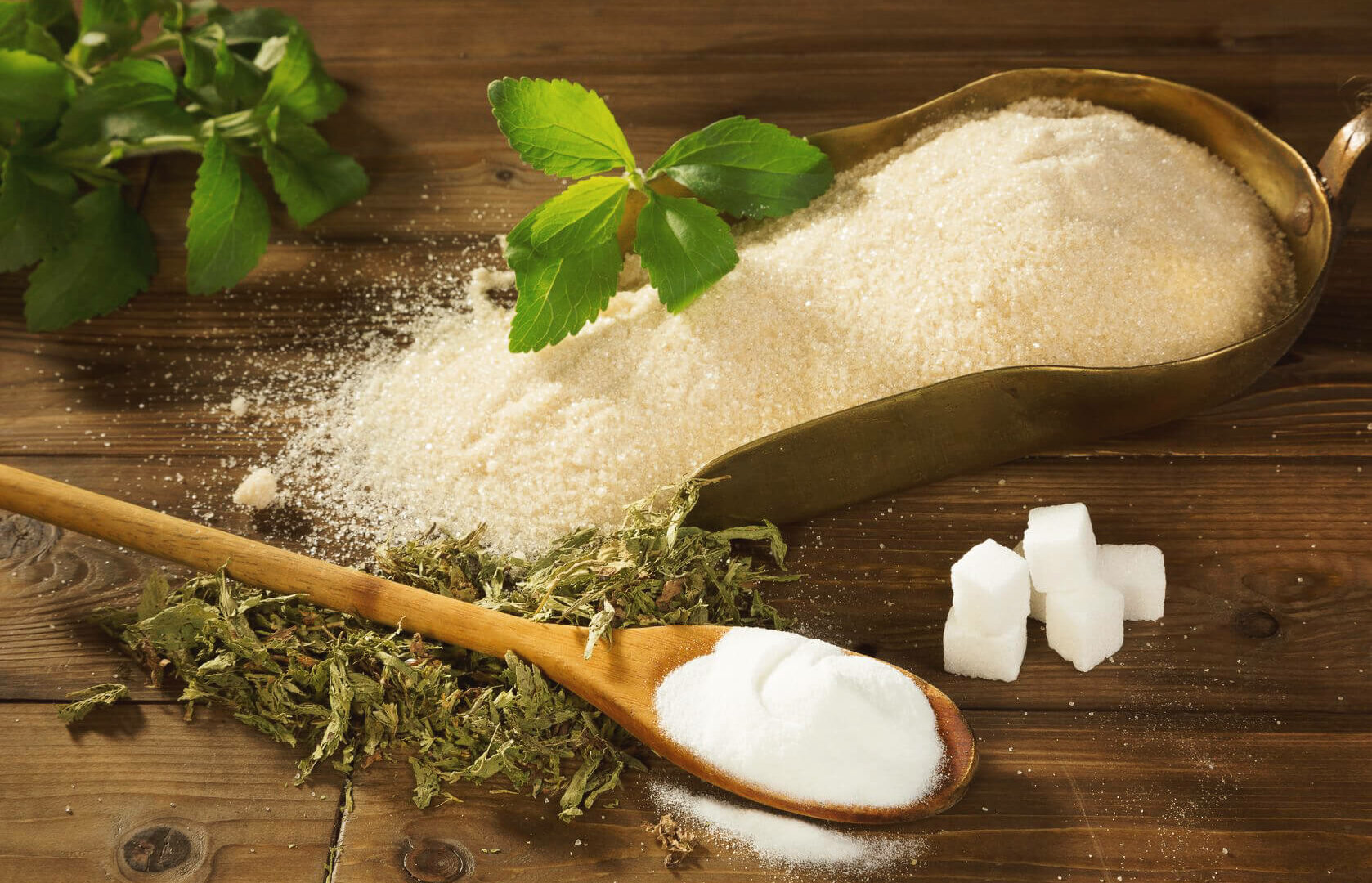 From our first ever candy as a child, many of us have a strong addictive-like affinity to sweetness. [1]

Sugar is usually the main ingredient that comes to mind when we discuss sweetness and can be found in a large majority of the foods we eat today. In fact, sugar-sweetened beverage consumption has risen by almost 40 gallons per person from 1950-2000. Suprisingly, the rise in sugar has also correlated with a rise in weight gain and obesity levels [2].

So, the question became how do we enjoy the sweetness and curb our cravings without the sugar and risk of obesity? The answer was artificial sweeteners; all the sweetness, none of the calories.

While this sounds great in theory, artificial sweeteners have been heavily criticized for causing cancer and other health issues. However, the evidence is certainly mixed, with no significant data to support this claim and with other more supportive research even showing that artificial sweeteners may actually improve body composition or aid in weight loss.

If you want a FINAL answer, then this article aims to take a scientific overview, analyzing the claims and providing you with the unbiased facts.

What are Artificial Sweeteners?

Artificial sweeteners are synthetic sugar substitutes that are far sweeter than regular sugar. This allows them to be used at a much lower dose or amount but still provide the sweetness we all love.

They are most commonly used in foods and beverages, labeled as “sugar free” or “diet”, to mimic the sweetness of regular sugar but with virtually no calories. [1]

While many artificial sweeteners exist there are five extensively researched and FDA approved sweeteners:

Saccharin was the first artificial sweetener created and was widely accepted as an alternative to sugar during the World War [1].

When sugar became affordable again, saccharin dropped in popularity until the obesity epidemic emerged a couple of decades later. At this point Saccharin was then revived and became a popular method to reduce calories [1][5][6]

However, evidence did start to emerge showing some negative side effects. For example, one study was published that showed an increased tumor growth within the bladder after high consumption of saccharin. Although this sounds scary, the initial finding was only tested in rats (1).

To follow this animal study up, a Canadian study was carried out and suggested a positive association between humans and bladder cancer [7].

However, more research has shown that rats have mechanistic alterations in the body that predisposed them to the bladder cancer. In other words, the results can’t be crossed over to humans and thus other researchers have concluded that the findings cannot be generalized to humans [1][3][7]

Furthering supporting the argument against carcinogenic and cancerous effects, a Danish study was unable to find any link between bladder cancer and saccharin usage in humans when examining the population during the WWI era when saccharin use was high [1].

When consumed, aspartame is broken down into three compounds: phenylalanine, aspartic acid and methanol. Both phenylalanine and aspartic acid are amino acids common in the human diet and have no adverse health effects. The methanol production is too insignificant to be of any health concern. [8]

For over a decade after its mainstream breakout, aspartame went unchallenged by the media and science world. To all intents and purposes, it was deemed safe.

Sadly, one study was soon published with the headline “Increasing brain tumor rates: is there a link to aspartame?” and artificial sweeteners became public enemy number one [9]

The study, however, was only based on a loose coincidence between a rise in brain tumors during the same time period in which aspartame was introduced. In the science world this is known as an ecological fallacy. In short, this is where research attempts to link events that occurred during the same time period to a given outcome, however, it doesn’t mean they have substantial association [1][9]

Further studies were done to investigate aspartame on rats to test if there was a link to cancer. In one study they found that after two years of elevated aspartame consumption the rats did develop malignant tumor growth. [1][11]

But as before, when applied to humans, Gurney et. al found no increase in brain tumors upon continued use of aspartame in children, even when this was tested with patients who already had brain cancer [12].

So, to this day, we still see artificial sweeteners being claimed as unhealthy and bad for your health. However, the evidence doesn’t really support this and the negative effects from sugar is likely a far worse alternative if regularly consumed at an unhealthy level.

Mixed in with all of these artificial sweeteners is another sugar substitute known as stevia. Stevia differs from the aforementioned sweeteners in that it is not artificial but rather a 100% natural sweetener, derived from the plant Stevia rebaudiana [15].

Native to South America, the Stevia rebaudiana plant has been used as a sweetener for ages. It comprises two compounds, stevioside and rebaudioside A, each far sweeter than sugar. It has zero calories, already making it a better option than sugar [16].

Furthering the argument for stevia, studies have shown that it can actually provide certain health benefits. One study showed that people with hypertension, who supplemented with stevioside, showed significant decreases in blood pressure with no adverse side effects [16].

So a 100% purely natural substance, with zero calories and health benefits, this is too good to be true? Nope, it’s definitely true and thus why Stevia is considered the best option for a sugar substitute. So if you’re looking for a way to reduce your calorie intake while still satisfying your sweet tooth, look no further than Stevia.

Sugar is one of the key factors in the obesity epidemic. It has addictive properties and yields a high energy intake with 4 kcal per gram.

In most cases, sugar will often add at least 120 extra calories to a soft drink or sweet food. Worst still, regular soft drinks make up 47% of total added sugars in the US diet and contribute to over 150-200 calories per day. While this doesn’t sound significant, it can easily total 10LB of weight per year. [13]

Unfortunately, unlike sugar from fruits or wholefoods, the sugar-sweetened products are full of calories but don’t satiate people or reduce hunger after their consumption. In other words, you are consuming calories but your body isn’t recognizing this influx, so you continue to eat as if you had drank just water. This leads to an excessive calorie intake, the key driver in weight gain and obesity. [2]

As you may expect, studies have drawn close correlations between increased consumption of sugar-sweetened drinks and weight gain/obesity. One study observed a loss of 1.9LB when sugar was reduced, but a weight gain of 1.6LB of bodyweight was found with an increase in sugar consumption. [2]

To support this, another study from Denmark also showed that added sugar consumption led to increase in both bodyweight and fat mass, whereas consumption of artificial sweeteners led to a reduction. [6]

Of course, from a calorie equation this doesn’t make much sense as most sweeteners are actually calorie free. Additionally, if they are replacing sugar at 4 calories per gram, they could actually elicit weight loss.

Other studies have shown that consumption of foods and beverages with artificial sweeteners rather than sugar has helped with weight loss and weight management when combined with an overall calorically reduced diet. [5]

There was one study that went against all others, showing an increase in calorie intake post ingestion of artificially sweetened products. [5]

However, further studies attempting to support and replicate this anomaly were unable to do so. In fact, countless reviews and analyses were done and concluded that these sweeteners actually led to a decrease in daily caloric intake and promoted further weight loss when dieting [5]

Artificial Sweeteners – Should You Worry?

We know that sugar, even when consumed in only moderate quantities, can be dangerous to our health and lead to metabolic disorders such as obesity and diabetes [2][5].

While this article isn’t suggesting you should go low-carb or eliminate sugar entirely, sugar is certainly not adding any health benefits and therefore, for the most part, should be restricted.

Based on the research and personal application with hundreds of clients, I believe that artificial sweeteners are a great substitute for sugar. They have a much greater sweetness on a gram per gram basis, allowing for a virtually calorie free product. Also they won’t lead to the harmful metabolic health issues that excess sugar can.

Though highly criticized and debated throughout much of their early years, artificial sweeteners to date have not shown any causal relationship to cancer. Remember, the studies that did show an association were carried out on rats which, due to differing carcinogenic mechanisms in a rat, cannot be translated to human consumption. [1]

Ultimately, any study suggesting positive links between cancer and artificial sweeteners in humans have failed to be replicated or were based on no substantial evidence other than coincidence. [1]

Many studies and analyses have illustrated the role that artificial sweeteners can play as a facilitator in weight loss when in a total caloric reduction during dieting. While working with many clients, I have also found the use of diet soda, sweeteners and sugar free gum help promote satiety between meals and aid in weight loss. [4][5]

Of course, if you are 100% paleo you can skip on the artificial sweetener. Hopefully you can see that, although this article simply shows artificial sweeteners are OK if you want them, I am not advocating their consumption for anyone who does not feel they are right for them.

Of course, anything in excess can be harmful, so drinking 2 large bottles of diet soda daily may not be the best choice. However, a couple of cans or a moderate amount per day is fine and can even be helpful, especially if you have a sweet tooth and get regular cravings.