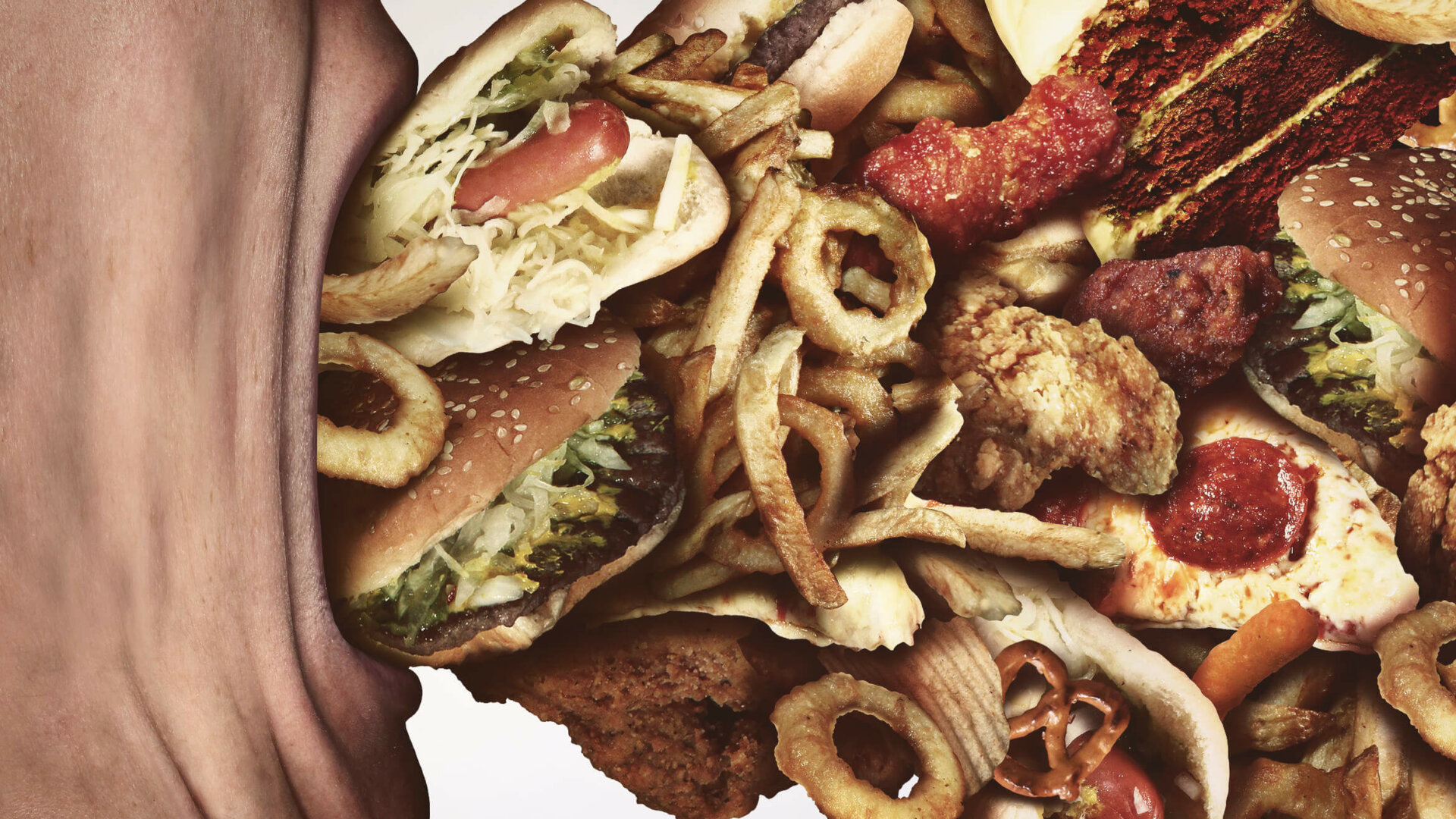 Most of us are aware of the issues that hunger causes during a diet, but did you know which hormones affect this and, most importantly, how they may be wreaking havoc with your long-term results?

There are several hormones that combine to control energy and food intake. Some function in a positive way, helping us stay full and control calorie intake, whereas others function in a more negative manner, telling your brain to overeat and increase hunger signals [1].

Of all the different hormones that regulate energy intake and hunger, two of the most common are Leptin and Ghrelin. Both of these hormones travel in our blood, across the blood brain barrier then send signals in the part of the brain known as the hypothalamus [2].

Leptin is known as the “good” hormone as it keeps us feeling full and helps us sensibly control our portion size and calorie intake. In contrast, Ghrelin is known as the “bad” hormone, promoting fat storage, over consumption, constant hunger and binge eating [1][2].

Studies have even shown that weight regain following a diet can be predicted by these 2 hormones; as you can see, they are a big deal for your physique! [3]

Here is everything you need to know about Leptin and Ghrelin…

Secreted in the stomach, Ghrelin levels will drop down shortly after a meal and then begin to rise up in the hours to follow [4].

When functioning correctly, Ghrelin does play an important role in survival, telling us to consume food when our bodies are in a state of low energy and promoting fat storage when needed. Centuries ago, this would have helped us survive winter or times of famine, partitioning more of the food we eat into fat storage to help survival [5][6].

However, it’s clear to see that nowadays Ghrelin is much more of a problem rather than a benefit in the Western world. For most healthy individuals without severe anorexia, food is clearly in an overabundance and survival isn’t an issue. In addition to causing issues in general obesity, it can make it very hard for physique athletes during a contest prep, post contest or if we are generally trying to lean down to a low body fat [5].

Like all other metabolic adaptations, this occurs because the body still functions in survival mode, unaware that we are intentionally restricting food and unaware that we have 1000s of calories available, within a block’s walk or in our own food cupboards [6][7][8].

If you’ve ever dieted and experienced constant hunger, then you’ll know Ghrelin plays a big part in this and it only gets worse as we continue with the diet. Over the long-term, it can even affect weight maintenance, becoming one of the hormones that set you up to fail.

Several studies have highlighted the negative changes in Ghrelin following a diet [9].

In one 6 month dieting study, they found participants who lost an average weight loss of 17% bodyweight had increased Ghrelin levels by 24%. In other words, hunger was up by one quarter! [10].

Another study in women highlighted the issue with frequent weight loss and regain, which closely resembles the pattern of most fitness competitors and enthusiasts. As expected, they found a relationship between the amount of times people dieted, and lost 10LB or more, and higher hunger hormones, including Ghrelin. Additionally, they found lower androgen concentrations, including androstenedione, testosterone and free testosterone for those that had dieted the most often! [11]

While most of the data is conducted in overweight or obese individuals, (as these are the people recruited for weight loss), one case study monitored changes in Ghrelin during a bodybuilding contest prep. In a similar fashion to results from all other studies, they found a whopping 40% increase in Ghrelin levels when the participants cut from 14 to 4%. We’ve all seen post-show blow outs, these changes can easily explain why people can force down 1000s of calories with no sense of portion control [12].

Another interesting study shown below injected Ghrelin into healthy normal weight rats. They too found rapid weight re-gain, without any change in diet, caused by the extra Ghrelin. In other words, it was partitioning more of the food/calories they consumed into fat stores while also lowering the amount of fat they burned! [13].

Finally, one study to monitor weight re-gain recruited 104 overweight males and females and placed them on an 8 week diet (-30% calorie reduction). The average weight loss was a 5% reduction in bodyweight. They then monitored weight maintenance for 32 weeks, finding that those who lost more weight had bigger decreases in Leptin and that increases in Ghrelin were associated with weight re-gain [14].

Much like Ghrelin, our Leptin levels are negatively impacted during a diet.

When functioning correctly, Leptin works as our body and brain’s long-term regulator of energy and weight. In short, it’s designed to tell you when you’ve eaten enough and to put the fork down. Most importantly, it also functions to regulate energy balance, i.e. the amount of calories we consume and burn – the key factor in weight loss or weight gain [15].

Within this, it acts as our body’s anti-obesity guard, trying to signal our brain that we don’t need to eat and have plenty of stored energy as body fat for fuel. While this works to some extent, we know obesity is caused by a multitude of physiological, environmental and psychological factors. In addition, many obese individuals now suffer from an issue known as Leptin resistance, which alters the signaling process [15].

As we gain fat, Leptin levels increase to try to send a stronger signal to stop eating and start burning the stored fat. However, in a similar fashion to insulin, our body becomes resistance to leptin’s signals. Just like insulin, Leptin is doing its best to function as it should, yet the body is non responsive. In this case, our brain thinks it’s ok to continually over eat, store fat and reduce energy output – the worst possible scenario for health or weight maintenance / loss! [16][17].

In contrast to weight gain, Leptin levels will continually drop during a diet which weakens the signal. Of course, this then makes it easier to overeat and store fat, as our Leptin levels aren’t strong and constantly telling our brain to stop eating, like they normally would.

When Leptin was first discovered it actually made quite a storm in the weight loss and medical world. Initially, researchers hoped we could somehow alter Leptin to cure weight gain and obesity. However, as we now know, the body’s hormonal and appetite regulating system is just as complex as rocket science [15].

Initial research highlighting the importance of Leptin started, like many other discoveries, in animals. In one well-known study they tested the effects of Leptin by injecting it into rats. Testing different groups of rats, they found some interesting results.

Firstly, in food deprived (i.e. dieting) and non-deprived rats Leptin helped reduce food intake and buffet-style calorie consumption. In addition, they found that the effects of Leptin did not stop obese rats overeating, which further supports Leptin resistance and signaling which becomes disrupted as we gain body fat and explains how we can continually gain body fat, even when we are at 30, 40 or even 50%! [18].

In humans, one study tested the relationship between the degree of calorie restriction and changes in leptin over a 12 week diet. Interestingly, they found a 55% decline in leptin levels, which, when calculated, was 10x the predicted change for the amount of body fat loss [19].

In other words, as we lose body fat or our fat cells shrink, leptin should naturally decline; this is because leptin is stored in our fat cells. However, the severe diet caused a whopping decrease, 10x the natural or predicted level, when considering the amount of body fat loss [19].

The authors highlighted that the more severe the diet (i.e. the lower the calories), the more leptin decreased, which would suggest that more aggressive diets caused more severe adaptations to our hunger hormones!

Another female-based study conducted in a metabolic ward (which tightly controls all the variables) placed participants on a 12 week diet. Leptin was measured on several occasions and after only 1 week of dieting, it had decreased by a major 54%. These levels remained throughout the diet and were also matched to participants’ reported hunger, their desire to eat and food over consumption! [20].

You should now understand the underlying importance of Leptin and Ghrelin. If you’ve ever dieted for a long period of time you will appreciate the large barrier that hunger and cravings can be for most people. In addition, either on a personal level or when working with clients many of you will be all too familiar with the rapid weight regain and binges that follow a diet.

Just like we try to optimize our diet, training and supplement regime, should we not try to also optimize our hormones? After all, our hormones control both body and brain so one could argue these are just as fundamental as external factors.

As with all aspects of diet, there isn’t any magic formula to transform your physique. Despite what some gurus may preach, the basics and consistency are still your best method to drop fat and get great long-term results.

However, now you understand how these hormones and others (Metabolic Adaptation and Reverse Dieting) adapt during a diet, it should hopefully change your mindset and approach to your own or your clients’ next diet and prep.

Firstly, the best method to stop these negative changes occurring is to obviously never do a severe diet in the first place. Of course, if you have excess fat which you need to lose, then you must diet, but, you may think twice about “dirty bulking” or yo-yo dieting that usually occurs post diet or post show.

If anything, the biggest takeaway here is emphasizing the need to build an enjoyable and sustainable plan that you can stick with and so, ultimately, avoiding excessive weight rebounds or binging in the long term. Of course, you won’t be able to stay around 5% body fat all year (and probably shouldn’t), but maintaining sub 15% (or sub 20-25% for females) is a much more sensible approach than rebounding and adding 20-30LB of fat post diet.

This is one reason flexible dieting can work well, as you aren’t going for long periods without the foods you love nor developing a bad relationship with food, caused by excessive restriction, like many of the 100% clean eaters or typical ‘dieters’ do. As always, a sensible balance which you can enjoy is key for the non-elite. [21]

While the above rule is still fundamental for so many reasons, there are some more specific strategies that can help you reduce these hunger hormone related issues. [22]

Along with these tips and as already emphasized above, the best way still revolves around building a sustainable, balanced plan you enjoy rather than yo-yo dieting every few months.

Before starting your next diet, consider the importance of your hormones and by optimizing them, you can only improve you long-term chances of success!