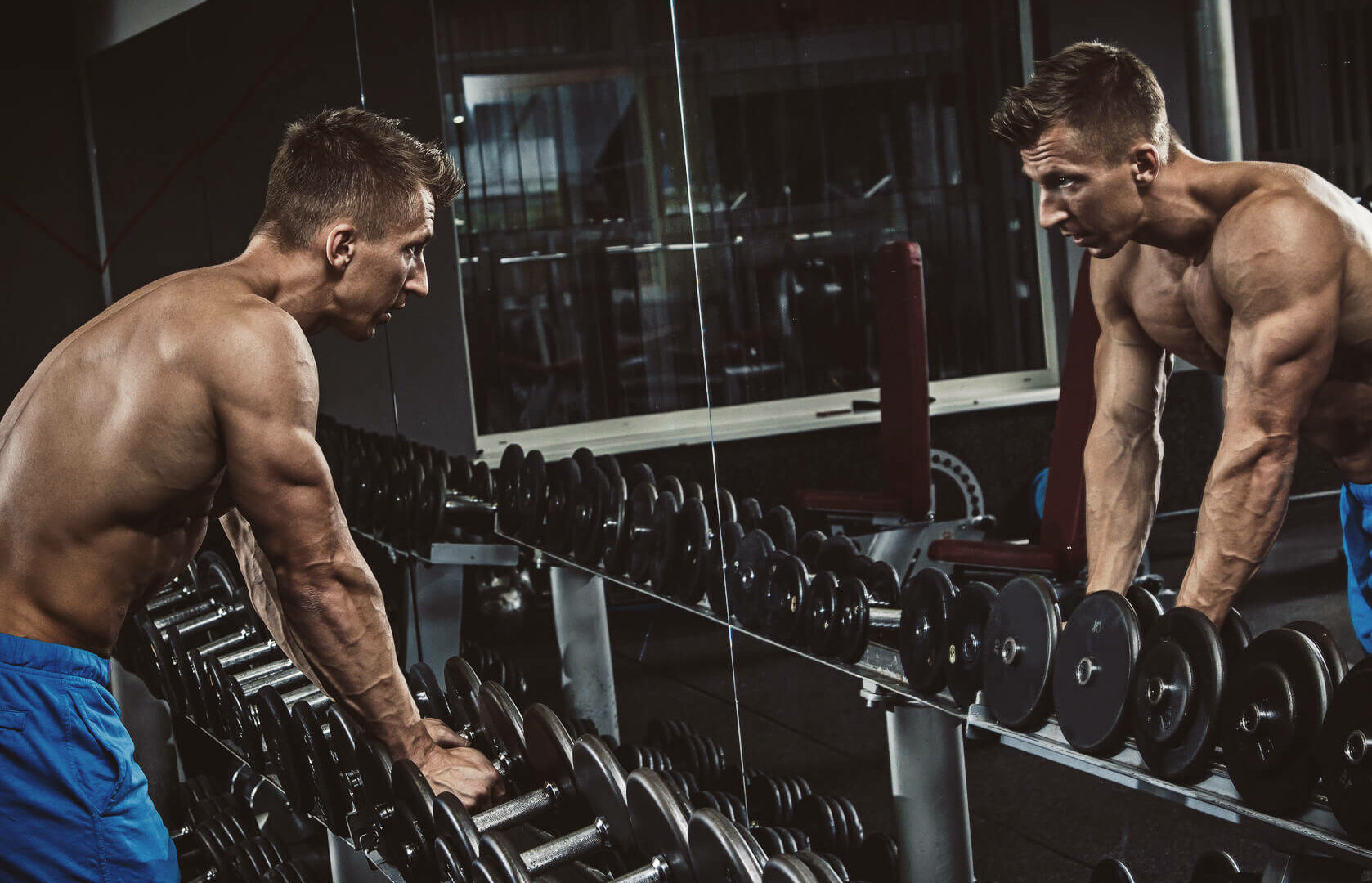 To many, the physiques that stand on stage at the Olympia every year are the absolute pinnacle of the human form.

Muscular, defined, balanced and lean – just writing the words forms an image of beauty in your head.

While everyone’s idea of the ‘ideal physique’ is different, it’s safe to say that most folk class physique competitors as being up there and as close to perfection as one can get, whether that’s in bodybuilding, figure, physique, bikini or any other category.

But what you see on the outside isn’t always reflected on the inside.

While things may look great when watching from afar, the mental battles that physique competitors can face are often exhausting, all-consuming, draining and downright miserable.

In fact, body dysmorphia is a big issue in the bodybuilding world.

A Caveat: This Does NOT Apply to All

The vast majority of physique competitors do not have body dysmorphia.

Sure, we all look at our imperfections, maybe freak out when we see we’ve gained some fat during a reverse diet, and stress out that we didn’t look as good as we did last time we dieted.

But that’s normal. Low calories and a high training volume can make anyone a little neurotic, and when you couple this with working so hard to look your absolute best, you’re bound to run into some body issues along the way.

This article is digging deeper though, and looking at the small percentage of people in the bodybuilding world who have dysmorphia that overtakes their life. What is Body Dysmorphia?

Muscle Dysmorphic Disorder (MDD) is popularly known as “Reverse anorexia” or “Bigorexia” by the media.

It’s important to differentiate between bodybuilders (or even people with a passion for training) and those with body dysmorphic disorder.

A study from the Royal College of Psychiatrists gave criteria for determining whether a person suffers from BDD. At least two of the following should be met –

– The uncontrollable focus on pursuing the usual training regimen causes the person to miss out on career, social, and other activities.

– Performance in the work and social arenas is affected by the presumed body deficiencies.

– The potentially detrimental effects of the training regimen fail to discourage the individual from pursuing hazardous practices. [2]

So It’s Just Guys Who Get This Then?

While the general public may associate muscle dysmorphic disorder as detailed above more with men, and eating disorders such as anorexia and bulimia with women, this isn’t the case.

It’s believed that anywhere between 0.7 and 2.4% of the population on average suffers with BDD. A study from the US found that 2.5% of women and 2.2% of men displayed symptoms, while similar research in Germany gave figures of 1.9% of women and 1.4% of men. [3]

It appears that men and women are equally likely to seek non-psychiatric, medical and surgical treatment, but women tend to receive more treatment than men. [4] So it’s definitely not just guys who are obsessed with muscle size and physique.

Is It Just Bodybuilders?

The research shows that BDD is much more common among bodybuilders. [5][6][7]

This is hardly surprising, but what’s not so obvious is whether it’s just competing bodybuilders, or whether all physique athletes, or even those who train recreationally are affected.

Considering that the bodybuilding stage seems the ultimate demonstration of one’s physique, you’d be inclined to think so. But bear in mind that BDD sufferers constantly compare themselves to others and so may find this experience extremely intimidating. The condition is also often linked with social anxiety disorders [8] and so stepping on stage may not actually be that appealing.

It would be easy to place the blame for BDD solely in the hands of the media, and their portrayal of bodybuilders. Or, in more recent times, it would be natural to think that social media has a huge role to play.

The pressure for people to look amazing has certainly never been greater, and even just a decade ago, the only time you saw people who were ripped, lean and muscular would have been in bodybuilding magazines, or on Internet forums, which you might have visited once a day.

Nowadays though, we all have Instagram and Facebook on our phones, and even if we don’t actively seek out pictures and videos from our physique idols, we see them anyway, due to the fact we’ve liked certain pages, become friends with particular people, or because of advertising methods and retargeting strategies.

This aside though, research actually shows that the likelihood of developing BDD may actually be largely due to genetics. Slight physique-related concerns, or worry regarding physical appearance is mostly environmental, but, much like Obsessive Compulsive Disorder, full-blown BDD appears to be significantly dictated by genetics. [9][10]

As BDD has only been recognized as a condition relatively recently, the research on the most effective treatment methods is somewhat lacking.

It does appear that most of the literature points toward Cognitive Behavioral Therapy (CBT) as being the best course of action. [11][12]

Treatment has to be individualized however, and it’s important that any therapist who’s treating a potential patient firstly runs through various questionnaires and assessments to ensure that it is BDD.

If you’re worried about yourself, the first (but perhaps hardest) step is talking to someone.

Everyone involved in the physique and bodybuilding industries will feel a little insecure about their bodies from time to time, freak out if they gain some fat, and have a constant desire to build more muscle.

That’s normal. You care about your body and your appearance, and it’s something that matters to you.

There’ll even be times (such as in prep) when your priorities shift slightly, and training and diet does overtake other aspects of your life to become more important.

While this shouldn’t happen for too often, or for too long, and you will have people who just don’t understand, this again is just part and parcel of the industry we’re in. You work hard and that’s something to be proud of.

When things get to the stage where you’re constantly obsessed with your appearance, you think of little more, relationships break down because of it, and you find you can’t do things like go on vacation, eat meals out, or have time with your family for fear of missing a workout or breaking your diet, that’s when you might want to seek further help.

If this article shows anything though, it’s that you’re definitely not alone in this. BDD is more common than you might think, and can be tackled, so don’t suffer in silence.