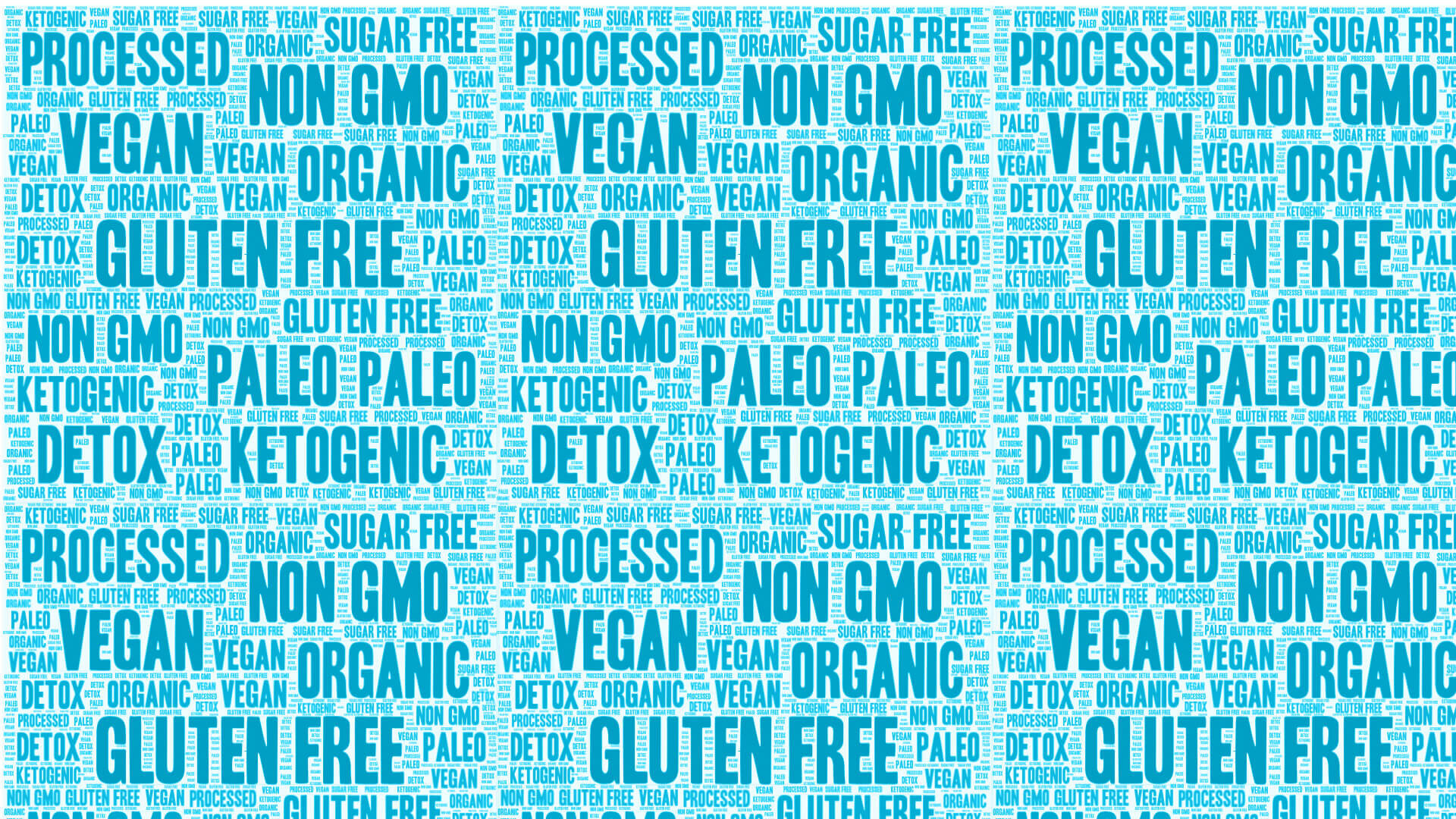 The Pitfalls of Dietary Buzzwords

There is an unsettling trend that has gained momentum in the nutrition industry. Food companies and diet gurus have resorted to the use of buzzwords and catchphrases in order to market their products. Vegan, gluten free, paleo, fat free, and no sugar labeled foods have flooded the shelves of your local grocery store. Likewise, many diets have used one of these buzzwords to make them more attractive to the general public. Even the media has caught on to promoting these diet trends in news stories that reach the masses. Naturally, this has led to an association between health and a diet that follows certain trendy parameters.

Most people will adopt one or more of these parameters in an attempt to eat healthy and lose weight. But do these food labels really mean that the food itself is “healthy?” Will following one of these diets help you to lose weight more easily? In truth, these buzzwords can lead you in the wrong direction if you’re not careful. They can convey a sense of false hope that you are eating healthy or losing weight just because you’re eating a certain way. Instead, it is important for you to look past these buzzwords and evaluate the food with a more objective scope before you decide whether it is right for your diet.

Many times, people will see a buzzword labeled food and mistake it for a low calorie food. Even worse, they may assume that they won’t gain weight as long as they stick to foods that fit the same mold. However, every food we eat contains calories no matter what label it has. In fact, many of the foods that are labeled with these buzzwords contain more calories when compared to similar non-labeled products. This is why many of these foods will also have the phrase “this is not a low calorie food” printed somewhere on the packaging.

So, just because your food is labeled as a “healthy” alternative doesn’t mean it is friendly to your waistline. You still have to analyze the caloric/macronutrient content of these foods just the same. Of course, you can still include these buzzword labeled foods in a well-balanced diet, and as long as you account for them in your daily intake, you will make progress toward your physique goals. Just don’t make the mistake of thinking they have any magic properties that will get you there faster.

These days, people are very concerned with how much processing their food goes through before they eat it. Likewise, the number of ingredients and “chemicals” there are in the food is important as well. However, these concerns seem to be lost on the buzzword labeled foods. This may be one reason why the food companies like to include these labels. It seems to quiet any concerns one may have about the food when it is labeled as a health food. However, these buzzword foods often have even more “chemicals” and processing compared to similar products.

Going back to the bread example, a regular bread product may have a mix of several whole grains, salt, yeast, and perhaps additional gluten as its ingredients. Looking at a typical gluten free bread, the ingredient list is much longer. Furthermore, because they need to replicate the look and mouthfeel of regular bread, several stabilizers, rising agents, sweeteners, and even preservatives have to be added. For those who are trying to avoid extra chemicals in their diet, gluten-free bread actually presents as the less “healthy” option between the two. This same trend can be seen in foods labeled fat free, or meat substitutes containing foods that are marketed to vegetarian/vegan individuals.

Furthermore, the processing it takes to make foods such as gluten free bread, fat free cheese, or vegan meat substitutes is far more involved compared to their traditional counterparts. Whether or not processing makes an impact on health is still being debated. But for those who are trying to avoid more processed foods, these buzzword labeled offerings are actually a step in the opposite direction. So, although the food industry tries to market them as being “healthy,” the processing and ingredients that go into some of these foods could be looked at as being unhealthy. Are These Things Really “Bad” For You?

The major theme that these buzzword operate on is the assumption that a certain ingredient or food group is bad for you. Keto is anti-sugar, vegan is anti-animal product, and so on and so forth, but it is impossible to really pinpoint all of our health concerns on the ingestion of one ingredient or group of foods. Even long term studies can be hard to rely upon given the rapid change in our dietary habits from decade to decade.

What we do know is that some of these ingredients might contribute to health issues on a case by case basis. For example, gluten will destroy the intestinal villi in those with celiac disease, which leads to digestion and health issues for that population [3]. We also know that gliadin (a component of gluten containing foods) can activate zonulin, which in turn can open the tight junctions of our intestinal lining [2]. Theoretically, this could lead to gut issues and inflammation if those tight junctions are left open for an extended period of time. However, a gluten free diet seems to only confer health benefits to those with celiac disease [4]. Therefore, in healthy non-diseased individuals, there is not much scientific evidence that gluten will cause any issues or impact health in a negative way.

Avoiding a certain food just because it has become the latest trend may actually be less healthy for you. You may lose out on vital nutrients and minerals that you won’t otherwise ingest from another food source. Additionally, your ability to digest and assimilate the nutrients from these foods will be diminished when you avoid them for too long. Once you do ingest them again, you could experience serious digestive distress or even fall ill. In a sense, you may essentially give yourself an intolerance to a certain food just by avoiding it for too long.

In the world of marketing and sales, labeling foods with buzzwords and catchphrases makes a lot of sense. They give people a sense that the food they are buying is safe or has some sort of special health quality. However, labeling a pop-tart as vegan doesn’t mean that the pop-tart is “healthy” or will help you stay trim. You still have to do your due diligence in looking past the label and objectively analyzing the ingredients and macronutrient composition.

Those who have a special health concern in which they need to avoid certain ingredients should of course abide by these buzzwords, but not everyone will be healthier just because they avoid certain ingredients or follow a certain diet. These ingredients affect each of us in different ways depending on our genetics and lifestyle, but avoiding a certain food just because it is the latest trend may be doing yourself a disservice. So, unless you have a valid health reason, basing your diet on these dietary buzzwords may not be the wisest choice.