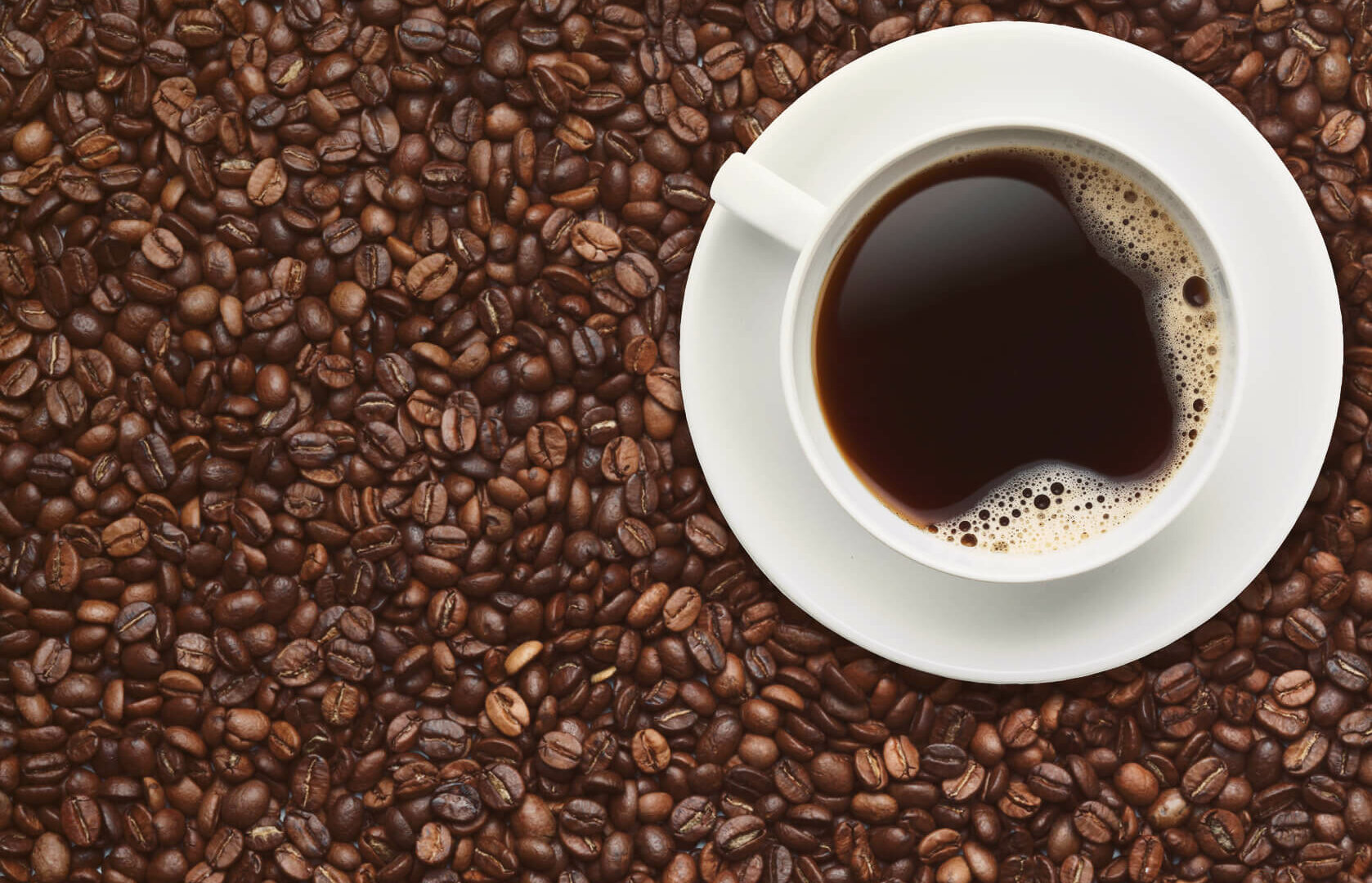 Although coffee is often just considered to be a tasty energy booster by the majority of the population, it actually possesses some unique health and performance benefits.

Over 80% of US adults now drink at least 1 cup of coffee on a regular daily basis which equates to nearly 600 million cups of coffee per day!

Luckily, coffee is one of the few drinks that can actually provide some unique health benefits without extra calories, sugar or fat.

From providing more antioxidants than most fruits and vegetables to boost sporting performance, this article will dive into all the unique benefits that a regular coffee intake can provide!

Coffee comes from roasted coffee beans which are actually the seeds of the berry (often called “cherry”) from a coffee plant. It has been around since the 15thcentury and is now one of the most popular drinks in the world [1].

Originally found in Africa, over 70 countries around the world now cultivate coffee plants into the popular drinks we consume at our local coffee shop or Starbucks [1].

There are numerous compounds, in fact hundreds of compounds, found within coffee. Of course, caffeine is the most well known, providing an energy boost and multiple other benefits.

Antioxidants are molecules that reduce oxidation which can lead to the production of free radicals and cell damage. Increased dietary antioxidant content has been linked to multiple benefits, from reducing disease risk to increased recovery [2][3][4].

Coffee is also extremely high in polyphenols and may have a protective role in degenerative diseases such as brain diseases like Alzheimer’s, cardiovascular disease and even certain cancers [5].

Health benefit 1: Can Drastically Lower the Risk of Type 2 Diabetes

While there are some myths around coffee being unhealthy, research demonstrates the opposite.

In short, type 2 diabetes is chronically elevated blood sugar or blood glucose levels due to insulin resistance which in turn damages the body’s cells and can lead to serious diseases and illness.

Although observational studies have limitations and are not as accurate as randomized controlled trials, multiple studies have shown that regular coffee consumption may reduce the risk of developing type 2 diabetes by over 50% [6][7]. Specifically, one study found that those who drank at least 3 cups per day of coffee and/or tea reduced the risk of type 2 diabetes by approximately 42% [7].

In one large review they assessed close to half a million participants, showing that, on average for each cup of coffee they consumed, their diabetes risk factor was reduced by 7% [8].

Health benefit 2: Can Reduce the Risk of Alzheimer’s & Parkinson’s Disease

Along with aiding in metabolic disease or diabetes, regular coffee consumption may even benefit your brain and reduce the development of brain disease.

One of the biggest brain-related illnesses is Alzheimer’s disease, a primary cause of dementia across the world. Similarly to the above studies, one prospective study found that coffee consumption may be up to a 60% lower risk of developing Alzheimer’s and even Parkinson’s by a similar percentage [9][10][11].

As you may expect, other studies have also shown this translated into brain and cognitive function. For example, one study in the elderly found that those who did not consume coffee on a daily basis had double the rates of cognitive decline compared to those who did. Interestingly, those who consumed 3 cups per day actually had declines which were 4.3 times smaller than the non-coffee drinkers [12].

Multiple studies have also shown enhanced brain function in tests such as memory recall, mood, vigilance and reaction time when consuming caffeine, which is of course found in high amounts in coffee [13].   The caffeine found in coffee (and supplements etc.) can block a neurotransmitter called Adenosine, which, in turn, increases neuronal firing rate and the release of dopamine and norepinephrine [14][15].

Health benefit 3: Coffee can reduce the effects of aging and premature death

Considering the extremely high antioxidant benefits discussed so far, it may not be that much of a surprise that coffee can actually help reduce premature death, chronic disease risk and even reduces the effects of aging.

Along with all the individual studies showing improved health, two large epidemiological studies have investigated coffee consumption and showed it lowered risk of death by all causes. Interestingly, they found that the reduction in type 2 diabetes was most profound, reducing risk by 30% during a 20 year period [16][17].

Another study investigated the benefits on life expectancy based on the amount of coffee consumed per day. Interestingly, they found with 1 cup per day there was a 5% reduced risk, which then increased to around 10-14% if participants consumed between 4-6 cups daily [18].

While these results are impressive, we must remember that these are observational studies and do not draw firm conclusions because of multiple confounding variables.

Along with health benefits, I’m sure you will be glad to know that coffee can also enhance both your physique and performance.

Of course, these benefits are primarily provided because of coffee’s high caffeine content, which tends to sit around 100-150mg per cup. Caffeine has multiple benefits for performance and works via numerous mechanisms.

Firstly, it can stimulate the central nervous system which enhances various aspects of performance which is partly responsible for enhanced exercise performance in terms of strength, higher rep work, sprints and endurance exercise [19][20].

For your body composition, the high caffeine content can also help you burn more calories by raising body temperature and boosting your metabolism along with increasing fat oxidation, helping utilize more fatty acids for fuel. One study found up to a 29% increase in fat oxidation in lean subjects and a 10% increase oxidation in obese women. While increasing fatty acid oxidation sounds great, it’s important to note that total daily calorie balance is still key [21][22][23].

Caffeine has dozens of studies showing benefits in the exercise performance realm and, while it depends on the individual and their caffeine sensitivity, benefits can extend up to or even above 10% improvements [20].

How much should you drink?

As you can see, there are multiple benefits from consuming coffee, so the next question becomes how much should you drink per day?  As always, this answer is: ‘it depends’, on the individual and multiple factors, including sensitivity and tolerance to caffeine. Before deciding how much coffee to drink per day, you should also consider how much caffeine you obtain from other sources such as pre-workouts, soda, energy drinks and foods such as dark chocolate.

With that being said, the safe range of caffeine intake can vary, with ranges up to 600 – 1000mg being taken per day. This depends on the individual and their habitual intake. While some people can manage 600mg or more per day, others can become anxious, nauseous or irritable on just 200mg per day [20].

Considering the average cup of coffee contains around 100-150mg per day depending on strength, you may want to consider your tolerance to caffeine and other caffeine sources.

Based on the research shown above, there seems to be a sweet spot of around 3-6 cups per day; however, again, 6 cups may be excessive for those who are sensitive to stimulants. Just like caffeine, it’s also best to consume your entire daily intake before 4pm to avoid sleep issues at night.

If you are unsure, start with just 1 or 2 cups of coffee per day – you can always increase if/as needed. The efficacious dose for caffeine and performance tends to be around 150-300mg; therefore, if you do use coffee as a pre-workout stimulant you would want around 2 cups.

Coffee is a unique drink with an extremely high antioxidant content and multiple benefits.

As with anything, even water, you can have too much of a good thing so do not go overboard. Depending on your tolerance to caffeine, anywhere between 3 – 6 cups seems to be the sweet spot based on observational studies. With that being said, even 1 or 2 cups per day have been shown to provide great benefits.
If you don’t currently consume coffee because of potential health risks, the research fails to support these, if you consume within a regular healthy range and do not have any health issues (such as heart problems) that may be exacerbated by caffeine use.