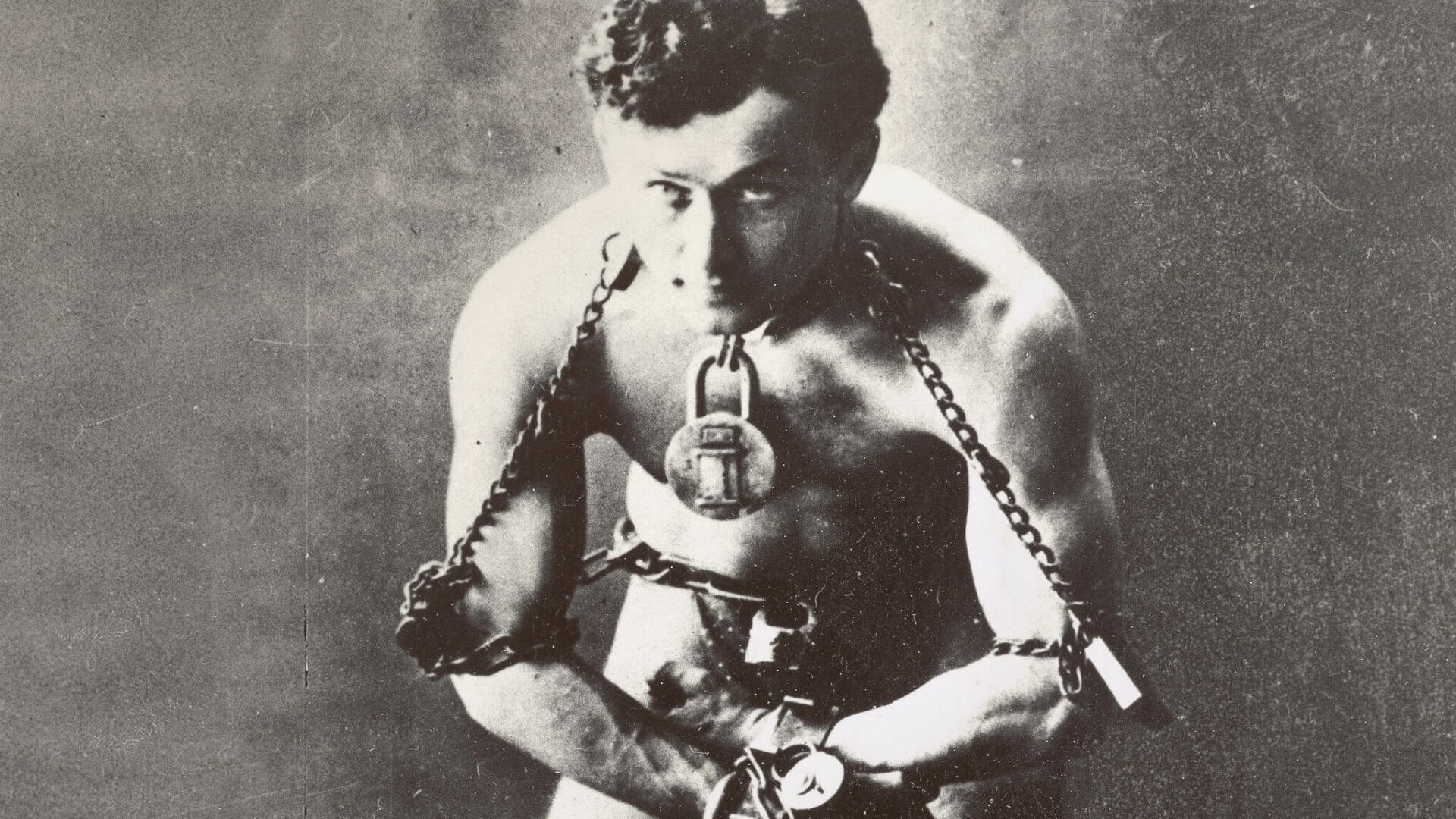 Houdini, Hypermobility, and You

Last century, Harry Houdini astonished his audiences with many death defying feats of escape artistry. You’ve likely seen them. He escaped from jail cells, milk canisters, and the water torture cell (which did not call him as erroneous reports claim). One of the most famous escapes that you can see modern performers do is that of escaping from the binding of a straitjacket. People allege that Houdini would dislocate his shoulder to facilitate this particular escape. In fact, people referred to Houdini as “double-jointed” and as such, he had an easy time performing those feats of artistry.

Today, it’s common knowledge that having “double joints” doesn’t exist. No, it’s actually something called hyper mobility. When you think of people who compete in bodybuilding or powerlifting, you might think of immobility. But there do exist populations who are hypermobile. So what is hypermobility? In short, it’s when a joint exceeds its normal range of motion. If you ever see someone whose elbows or knees appear to bend backward a little bit, you are witnessing hypermobility. To add to that, there are tests to determine hypermobility. One of the more popular tests is the Beighton Hypermobility Test. It’s a nine point test and anything scoring four or more qualifies you as having benign hypermobility. That particular test is as follows:

And there’s even more listed you can find in the references at the end. In addition to that, there are some distinctions. Some people can be hypermobile and not have any adverse effects because of it. Most often, this often referred to as Joint Hypermobility Syndrome (JHS). Other instances of hypermobility can refer to structural defects, pain, skin conditions, and so forth. Most of the time, professionals refer to the latter as Ehler-Danlos Syndrom (EDS). Not only that, there is no genetic test to determine either of them, so sometimes people will interchange the terms. And the treatments are all focused on prevention and not curing either condition. In some instances of repeated dislocations, surgery is also an option.

What Does this Mean for your Training?

Since EDS is rare, I am going to focus on general hypermobility. Let’s say you’re hypermobile. You decide you need to get strong and jacked some day, so you decide to start lifting weights. Awesome, right? And let’s say you don’t care about maxing your squats or deadlifts like a powerlifter. You lift because you want to look like you lift. So if you’re hypermobile, this could put you in quite the pickle. The pickle has to do with your range of motion (ROM).

When anyone lifts, you go through a range of motion for a lift, you reverse it and you lock out. If you’re hypermobile, two things can happen during this. Let’s say you are due for a set of squats. If you load the bar, hold the kettlebell, or whatever type of squat you are doing, you will get to a point where you will go too low. In fact, achieving depth in a squat is not difficult for a hypermobile athlete. However, it’s easy for a hypermobile athlete to go from active moving to hanging out in a passive range of motion, like the bottom of a squat. Increase the load, and it can get risky and dangerous.

It also means that you want to rethink how much, how often, and what muscles you stretch. Regarding feeling tight, Eric Cressey said

The reason they feel “tight” is because their bodies will lay down trigger points to protectively lay down stability where they otherwise lack it. If you just stretch them, you destroy their joints and just continue the painful cycle.

Instead, these individuals need to work on building stability within the ROM they already have with quality strength training. For the trigger points, they can do some extra foam rolling or get massage work done, especially if it helps them to wind down and shut off the sympathetic nervous system (fight or flight) for a bit.

Having said all that, exercise from is crucial if you’re hypermobile. So you want to work within the ROM you have, focus on active muscle recruitment over passive, and pay particular attention to your stretching. Next, we can go over how to do that.

As Cressey said, you want to build stability with what you have already. At first glance, isometrics seem like a good idea. Indeed, they might not even be a bad idea. But you want better. So let’s find “better.” In an isometric exercise, there’s no real loading to speak of. The meaning of the word itself suggests not moving. But we want to move, and we want to quantify it. That’s where static contraction training might play a role.

The original premise of the book Static Contraction Training posits that you can build muscle and strength without taking a lift through a full range of motion. While that’s well and good, the gem here is that it gives you a better alternative to isometrics. Since I’m talking hypermobility, this is where the magic happens. In short, you train a given portion of a lift. Like the bench press. So if you were to train the bench in this manner you would measure two things:

In the example, you would set up the squat rack pins so that if you put a bench inside and benched the bar, you would only move it a few inches at the end of the range of motion. In both the book and in your practice, you don’t want to lock out the movement. You want to hold it a bit shy of the lockout to stress your muscles like I mentioned before. Time the set. Do another set and see if you can exceed the time you held it for. Repeat the following week. The original protocol was low-frequency high intensity. As such, the high intensity can add both some rigidity in the tissue and stability in the ranges of motion. If you play it smart, you can ramp up the intensity at a rapid pace.

You can apply this concept to any number of lifts, as well. Preacher Curls, Squats, Deadlifts, Pull-downs, and so on. The key is to use the end of the range of motion, a heavy load, and short time. Measure all of it. Thus, you have quantified your static hold. With isometrics, you can exert as much or as little force as you see fit on a particular exercise. This fact makes them more subjective and less beneficial to you.

You don’t want to spend your life doing partials and static holds. Well, maybe you do, I won’t judge. That being the case, you have to pay attention to the loads and the ROM you use for a given lift. If your elbow hyperextends too much during a bench press, that could be a recipe for disaster. The easy answers for something like that are 1. get a coach to watch you and 2. film yourself doing these exercises. Aside from that, there are some other options that don’t require either. I’ll address it in a few different but common lifts.

For hypermobile lifters, once they hit depth their back will sometimes round and their knee joint will exhibit some valgus collapse and they will chill out there in a passive range of motion. Assuming you fix the valgus, and you can control your spine, opt for box squats. Find a height that has you hit depth.

Unlike the normal box squat which has a different purpose altogether, this is to reinforce a certain range of motion. So instead of taking out the stretch reflex, you want to tap your butt to the box and come back up.

Aside from the lower portion of the squat, pay attention to the lockout. If your knees hyperextend, don’t force all the load onto them in that position. Stop before you think you need to.

One thing I see often looks like this: a lifter reaches down to deadlift the bar. Her knees stop moving and the spine takes over. Every time I have seen that while training someone, they always have hypermobile joints. The best solution I have found is to perform rack pulls. First, note where

First, note where the form degradation occurs. A hair above that is your rack height. Reinforce the proper pattern, and increase the range of motion.

The other problem area is the end of the movement at the lockout. The lifter hyperextends their spine. A simple cue I use is as follows: imagine you are jamming your head through the ceiling. Almost always, this will fix spinal hyperextension.

So for the deadlift, if you are in doubt, use a rack pull. And stand tall for a good lockout.

This is a tough one. Too much elbow hyperextension under load and going against gravity can be bad news.

For the bench, opt for dumbbells. You can see your range of motion in your peripheral vision, and stop short of overextending your elbows.

Overhead pressing will use a similar solution. The caveat for this is to make it unilateral. One dumbbell per arm, and look at the weight as you press it. You will again be able to see the execution of the range of motion and add or decrease from there.

The good news about hypermobility is that it affects around five percent of people. In addition to that, it affects women more often than men so if you aren’t hypermobile yourself but deal with someone who is, make a note of that. Not only that, be careful in your training. Proper training can help you, as always. Improper training can hurt you as well. If you are on the extreme end of this spectrum, perhaps you have EDS, clear this stuff with a doctor. And if you want to be an escape artist, keep practicing and don’t give up on that dream.