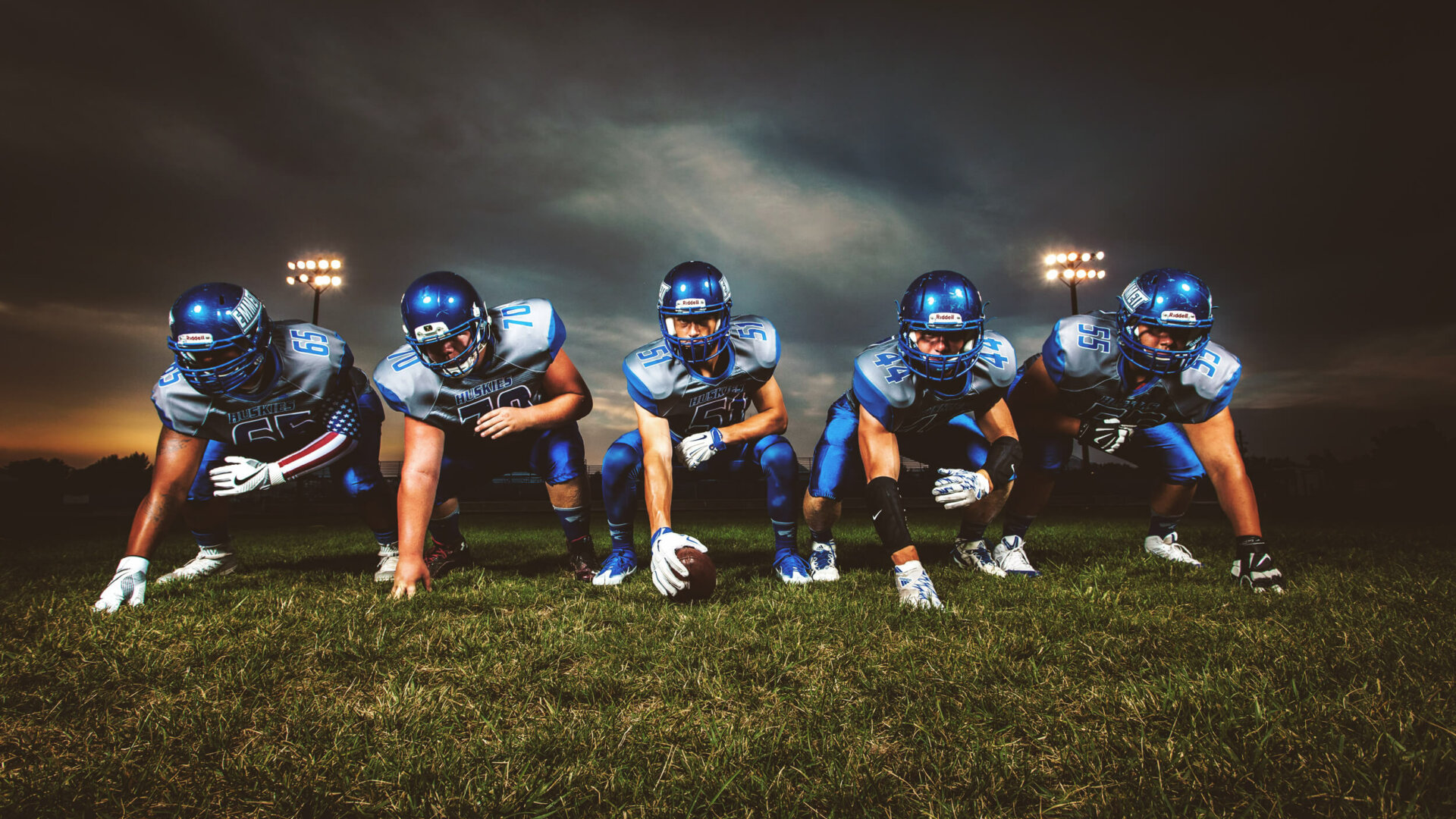 Football is America’s ​de facto ​national pastime. We come for the dramatic collisions, we drag our friends out to cheer for our team, we have our children in jerseys before they’re old enough to play themselves. It’s our most popular athletic obsession, to the tune of a mammoth $14 billion dollar industry that grows larger every year.

But in recent years, the media has become increasingly aware of the health risks of football, and of contact sports in general. Reports have made us spectators more knowledgeable about the dangers of repeated head injuries, the way frequent tackles can destroy a player’s health.

And at the high school and college level, this danger has become a huge concern of schools and coaches. Parents wonder if they should pull their children out of sports altogether, and if the benefits of playing their favorite game really outweigh the crippling health risks.

The truth is that football ​is ​a dangerous sport—when played incorrectly. Collisions are dangerous when players are unaware of the techniques they need to make safe and effective contact with the opposing team. Without proper preparation, and without training with the correct exercises, student athletes are likely facing the same risks as NFL players did just a little over a decade ago.

Fortunately, coaches and schools today have better access to the techniques and practices they need to put in place, allowing them to slowly make efforts to make the game safer for young athletes. In this article, we’ll examine the major concerns brought by the media, as well as the advantages of better, more specific training to reduce the risk of traumatic brain injury in young players.

In 2005, Dr. Bennet Omalu published some alarming findings on the topic of traumatic brain injury. (The fallout was later dramatized a decade later in the Will Smith film ​Concussion,which further thrust the study into the public eye—and which might be the reason you’ve heard of this research.)

Originally studied in boxers in the 1920s, CTE affects people who have taken severe blows to the head, typically on a repeated basis. The symptoms can initially include things like disorientation and confusion, progressing to more severe issues like memory loss and impulsive behavior in later stages. Late-stage symptoms can also include dementia, deafness, and even suicidality—which had claimed the life of Pittsburgh Steelers player Mike Webster, whose sudden death had inspired Omalu to finance the study in the first place.

In his findings, the neuropathologist noted that the repeated collisions endured by the players throughout the course of their career were likely to lead to lasting brain damage and depression.

As you can probably imagine, these findings weren’t initially popular with the NFL: the league even called for the paper’s retraction, refusing to publicly acknowledge the link between tackles and brain damage until 2009.

In the years since, the media has begun to focus on the dangerous nature of contact sports in general, particularly football, putting them under a national spotlight. One recent Economist headline proclaims that “​Few sports are doing enough to protect athletes from brain damage​.” Another from ​Men’s Health ​asks “​We know football is dangerous. So why are we still letting our sons play it?​” Articles like these document recent research on the dramatic consequences of repeated head injuries for players, as well as the work of advocates who call for coaches, schools, and states to protect their young athletes.

The truth is, these worries aren’t unjustified.

Without a single governing body to spearhead legal changes and training modifications throughout the United States, the risk of danger due to concussions ​is ​a sobering one. Coaches and schools that are unaware of or unwilling to follow the proper practices can seriously threaten the health of students involved in the game. And unfortunately, many young players are still encouraged to hit hard, fast, and often, thinking only of the short-term win rather than their long-term health.

According to ​a study​ in ​Clinics in Sports Medicine, ​football continues to have one of the highest rates of traumatic brain injury of any sport played in the US (Worth noting: it also has the highest participation rate of any sport studied). Further, sports and recreational activities contribute to approximately ​21 percent​ of all traumatic brain injuries among US children.

The research ​shows us how dangerous sports can be. And yet we continue to play them—and to let our children play them—without changing our approach. Sports offer up a wealth of benefits to student athletes, and maybe it’s a little too easy to be blinded by those advantages.

The Benefits of Sports Participation Outweigh the Risks

Despite the growing concern over health risks, sports participation can offer numerous advantages to young players. Physical activity is an obvious one, especially to any parent complaining of a sedentary kid: young athletes have the opportunity for practice and exercise, as well as a regular chance to build strength, coordination, and fine motor skills.

Beyond that, student athletes gradually build their self-esteem and confidence through training and gameplay, learning to trust their own judgement. Team sports teach the value of social and interpersonal skills, allowing players the opportunity to build the communication and team-building skills that will carry them through life in general. Discipline teaches players the art of setting and reaching their own goals.

With all these benefits, it’s crucial to make sure young players can still enjoy the advantages of contact sports without suffering the consequences of CTE. There are two main areas in which players can train and prepare themselves for proper contact, helping them approach the game from a healthier perspective.

In the past, the most popular football techniques were the most effective ones, regardless of the risk involved. And before the discovery of the connection between concussions and CTE, it wasn’t uncommon to see players use their heads as shields or battering rams. Unfortunately, the presence of the helmet sometimes gives players the misguided idea that the skull is fully protected from harm, or even that the helmet is part of the uniform ​for the explicit purpose o​f using it as a weapon—even when this couldn’t be further from the truth.

Today, we know it’s important to get your head ​out ​of the game, protecting the brain from damaging blows. That’s why it’s crucial to teach players safer and more effective collision techniques.

Coaches should break down the various components of the collision itself, blow by blow. Players need to be taught how to move safely and effectively—without using the head as a main point of contact. These techniques may differ from sport to sport, but it’s critical for players to be so comfortable with the best practices that they adopt them as automatic reactions. Technical drills help players to adopt the best posture and form, internalizing the movements through practice.

Develop a strength and exercise program.

In the majority of contact sports, the impact of tackling, blocking, and gripping is where the most damage occurs. For this reason, it’s important to build young players’ strength in the head, neck, and shoulders. Exercise programs that include neck and jaw strengthening have been shown to help reduce the incidence of concussions in contact sports. One ​study​ even found that a 20-minute exercise program reduced the risk of traumatic brain injuries in high school rugby players.

There’s a substantial cross-over of preparation and training methods that can be applied for collisions and contact scenarios in many different sports, including football, hockey, lacrosse, rugby, wrestling, and to a lesser extent soccer and basketball. In all of these sports, the goal is to build players’ skills and confidence in safely and effectively following through with contact while minimizing the risk of head injury.

Regardless of the sport, the primary areas of training should include the following:

The following gym exercises can be used generically, across a spectrum of sports, to help players prepare for collision situations. These exercises are best incorporated alongside a traditional strength and conditioning program, one that includes more well-known compound exercises for strength and power, such as squats and deadlifts.

The exercises are broken down into three main categories:

At the end of the day, the media hype over the dangers of contact sports ​is ​worth worrying about—but only when young athletes play incorrectly. With exercises designed to strengthen the more vulnerable points of contact, as well as sport-specific techniques to help them make safe but skillful contact with the opposing team, players can reduce their risk for concussion. And with these new skills, they’ll be able to keep playing the game they love for longer.

With a Master’s in Performance Science and fifteen years of professional rugby experience under his belt, Roger Wilson is the founder and coach of Tackle Smart Sports in Dallas, Texas. Currently, his goal is to combine science-based research and his own professional experience to help make football and other collision sports both safer and more...[Continue]