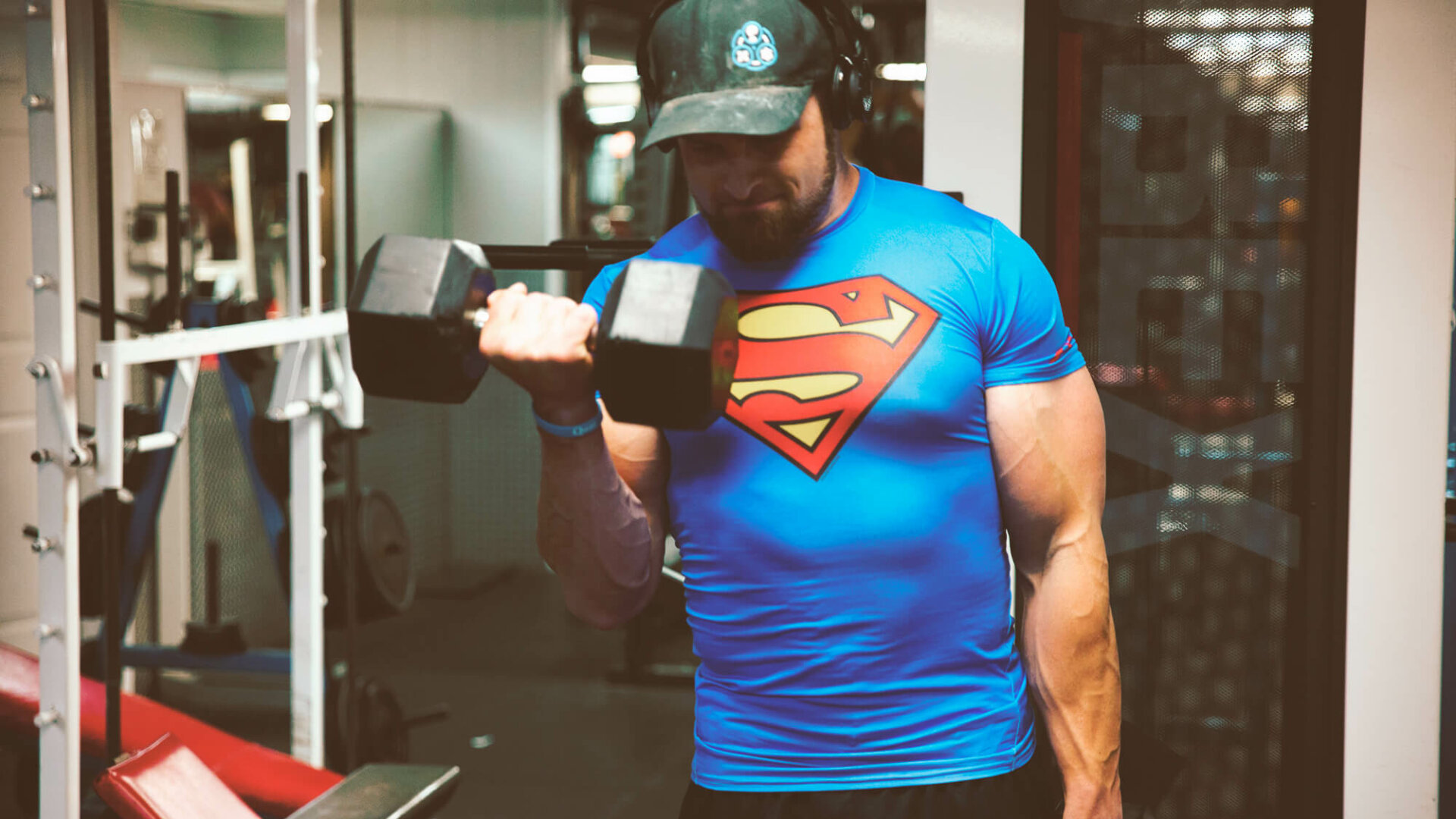 There have been a lot of claims regarding supersets over the years, but now there is some research to back some of those claims. With that in mind, let’s take a look at the claims, and then let’s explore some of the options.

The first benefit is obvious. Supersets are efficient. They get you out of the gym quicker. Think about it like this: if you do a set of bench press, you rest two minutes, repeat a few times and then you do the same thing with something like barbell rows, it’s going to take a fair amount of time.

If you fill those two minutes with exercise of the antagonist muscle groups—basically if you do a bench press and follow up with a barbell row—you’re having twice the fun with shorter rest times.

Moreover, Weakley et al took a look at the short term effects of supersets, traditional training (where you go exercise by exercise), and trisets (three exercises done consecutively). They looked at perceptions of intensity as well as physiological responses to each type of training.

Their methods were as follows:

The TRI (triset) group reported they had experienced possibly to almost certainly greater efficiency. In addition, they had a greater intensity on the form of rate of perceived exertion (RPE). Another point of interest for the SS (superset) and TRI groups were the increases in testosterone. These groups reported possible increases post training, with SS showing possible increases 24 hours later.

Now, keep in mind the sample size was small so more research is needed, and there were other points of note in the results. For this particular study, they concluded that:

“SS and TRI can enhance training efficiency and reduce training time. However, acute and short-term physiological responses differ between protocols. Athletes can utilise SS and TRI resistance training, but may require additional recovery post-training to minimise effects of fatigue.”

Again, efficiency is a definite.

Not only that, but in another recent study, Weakley et al looked at three modes of super setting as defined consistently in literature in three of the following ways: A-A, which is agonist and antagonist pairing which would be the common bench press and barbell row combinations, A-P, which is alternate peripheral pairings of muscle groups, like a squat and a pull-up, and S-B, similar biomechanical movements, like a dumbbell row and a barbell row.

The main take away from this is that for hypertrophy phases, A-A and A-P supersets are beneficial in that they don’t increase the RPE, which can allow for more volume. From an intuitive approach, this makes sense because if you followed a S-B superset approach, you’d be taxing the same muscle groups back to back, which can yield a possible feeling of more intensity. Nevertheless, I will include some good options for that style later if you happen to enjoy masochism. One final note, traditional training was great for maintaining velocity, force, and power output, so if you’re focused on those variables, it might be advantageous not to superset, or at the very least, not to superset the exercises in which you want to maintain those variables.

These are likely the biggest bang for your buck supersets, so let’s start here. They work well with most splits. If you do them right, you can minimize the equipment used, and of course, you save time.

First, we have a classic. The barbell bench/bent over row. This is the classic push/pull superset. It’s a great way to train both strength and hypertrophy in these muscle groups, depending on your goal. Typical protocols apply here: keep the reps on the lower side for strength, raise them up for more volume for a hypertrophy focus.

One of my favorite tweaks to this superset involves an incline bench and some dumbbells. It’s still a push/pull superset, and it’s a wonderful way to nail some volume down. The difference is you perform an incline dumbbell bench first, flip over on the bench and perform some chest supported dumbbell rows. For a high volume option, use Vince Gironda’s 8×8 template and perform eight reps of each exercise in a row. Rest after each superset.

Up next, we have a another push/pull superset, except this time we’re going to focus on vertical motions.

An easy one is the barbell military press/pull-up combination. I like to use this one primarily for strength, since these two are pretty taxing compound lifts. For that reason, I keep the reps fairly low, in the four to six range, for this combination.

However, when I want more volume, I tweak them much like I did with the horizontal push/pull. So for more volume, I like to substitute the Arnold press for the barbell military press and the lat pull down for the pull-ups. Just like before, it allows you to increase the sets and reps.

Now, here is a more unconventional A-A pairing. The first one is the deadlift/hanging knee raise. I like this because we don’t often train direct hip flexion with our spine in traction. This superset allows you to do just that. Not only that, but the leg raise, as I mentioned before, is a great core stability exercise which means your deadlift is going to improve because your core endurance and stability will improve. Start low on the reps for the leg raises, and keep the knees bent for an easier rep. Straighten the legs and/or increase the reps to make it more difficult.

These are also advantageous for the reasons discussed above. My favorite A-P pairing is the deadlift/pull-up. I always pair these two because it allows me to train the pull-up more than once a week for a variety of purposes. When I pair the deadlift and pull-up, the intensity is high. Usually, I will keep both in the three rep range so that I can train two movements for max strength in a short amount of time.

Another advantage of the A-P pairing is the ability to do higher volume isolation work in conjunction with heavier compound lifts. This brings me to my favorite A-P pairing: the reverse lunge and dumbbell curl. Just like it sounds, you perform the reverse lunges with a set of dumbbells for 10-12 reps per leg, immediately grab some lighter dumbbells and fire off some dumbbell curls for 8-10 reps, and follow with your rest period.

These pairings will usually knock the tar out of you if you do them right. The drawbacks were discussed above, but they aren’t wholly without merit. At the very least, I personally have noticed that these types of pairings yield a hyper focus on movement quality over trying to lift a heavier weight and letting the ego get in the way. Not only that, they can also ramp up the volume.

It’s important to note that the word “similar” here implies that you’ll be working out the muscles differently in each exercise. With that in mind, let’s look at one S-B pairing for our biceps: the preacher curl and the incline dumbbell curl.

Now that the dorky stuff is out of the way, set yourself up on an incline bench and perform some dumbbell curls, making sure to keep your humerus locked into place. You don’t want them to move. Perform for high reps, something like 10-12, then immediately perform a set of preacher curls for 8-10 reps.

Since you have a S-B pairing for the biceps, it’s only proper to do a pairing for the triceps. One of my favorites is to perform a close grip bench press in the 6-8 rep range immediately followed by dumbbell skull crushers for 10-12 reps. For the skull crushers, it’s more practical to use the same bench for both exercises. Just slide down on the bench a little bit so the racked barbell doesn’t get in the way of you performing the skull crushers. Not only that, but keep your humerus locked into place.

If you can, experiment with the dumbbell skull crushers. Some like them better on an incline bench with slight incline. If you can swing it, go for it.

And finally, to top off the upper body, we have another excellent pairing for our delts: a lateral raise and the Arnold press. I like to perform the lateral raises for a minimum of ten reps and jump right into the Arnold press with the same set of dumbbells. I usually take the set to technical failure, that is, I perform them until my form degrades, or ideally, right before I feel like my form will degrade.

Now, to wrap this up, since there haven’t been many lower body exercises mentioned, I’ll leave you with two S-B pairings that will make your legs quake.

You’re going to perform the barbell back squat for 6-8 reps, and immediately grab some dumbbells and perform the split squat for 10-12 reps. This superset is absolutely awful in a good way, so err on the side of light when you first try it.

Last but not least, the posterior leg muscles. This one is just as terrible as the quad killer, doubly so if you do them in the same workout. For this one, you’re going to pair hamstring curls and good mornings. Perform the hamstring curls for 8-10 reps, then immediately jump over to the good mornings and perform them for 12-15 reps.

So there you have it. Supersets can be great additions to your program. You can use them to save time, add volume, specialize a body part, or even all three if you’re crafty enough. To leave you with an example of implementation, try this routine on your next leg day:

And to finish the workout,

You can substitute these S-B pairs with some of the other ones we mentioned by changing the exercise order, or even coming up with your own.