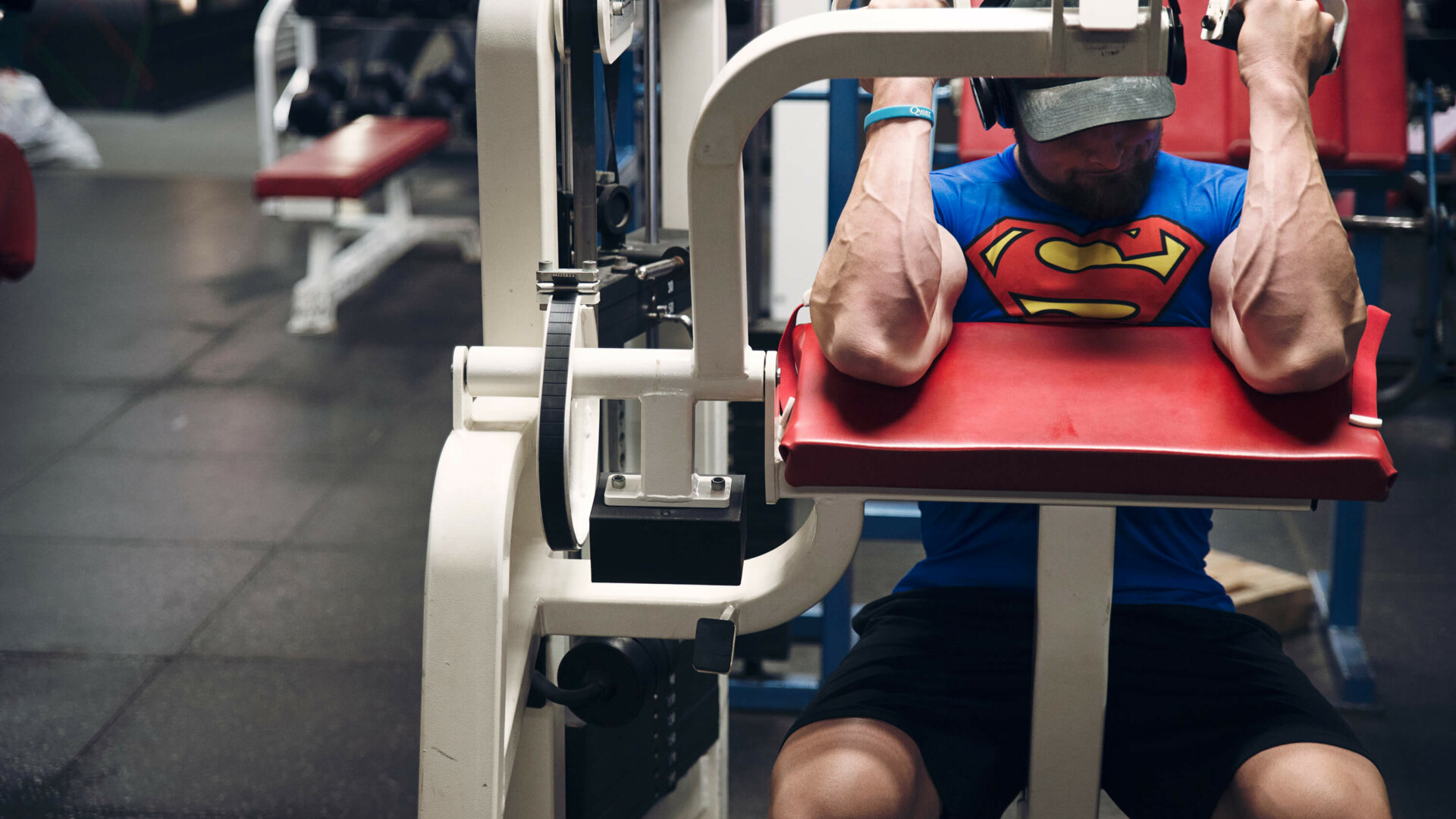 Increases in muscle growth is a complex process driven at the cellular level by protein accumulation into contractile and non-contractile proteins. Muscle growth in adults is believed to occur via increases in cell size (hypertrophy) rather than increases in cell number (hyperplasia) [9][24][33]. Muscle growth is desired by various populations ranging from cancer patients [1] to NFL football players [13], and in particular, bodybuilders [11]. There are numerous factors that may influence and or have been associated with skeletal muscle hypertrophy including hormones [30][31], nutrition (namely protein intake), and resistance training [21][22]. A variable that has been studied and debated by researchers, clinicians, and bodybuilders is the use of partial range of motion (pROM) compared to full range of motion (fROM) for strength, hypertrophy, and power. Strength outcomes have been the major factor investigated in these experiments and more often than not fROM is most often generalized as most beneficial which has been generally attributed to a greater amount of mechanical stress about the whole length of the muscle [5][8][11][17][18]. However, some of these same studies along with others show some benefit to pROM in either strength outcomes, hypertrophy, and rehabilitative protocols [10]. The purpose of this article is to focus on the effects of pROM during RT on hypertrophic outcomes and to elaborate some of the research and factors that may influence a hypertrophic response in conjunction with the use of pROM in RT bouts.

The American College of Sports Medicine published a position stand in 2009 suggesting an intensity or load of ~70–85 % of 1 repetition max (1RM) for 8–12 repetitions per set for one to three sets per exercise and most time training spent in the 6-12 repetition range for optimal muscular hypertrophic responses [2]. However, this stand disregards range of motion (ROM) as a functional factor that may or may not influence hypertrophic responses. This may be due to fewer studies comparing pROM to fROM by observing functional strength outcomes. Full ROM is defined as the amount of movement about a joint, which is dependent upon the joint articulation, classification, and the plane or axis the movement takes place. Similarly, in relation to skeletal muscle, full range of muscle work is defined as a muscle from a position of full stretch to a position of maximal concentric contraction [6]. Recently, there have a handful of research training studies assessing muscle growth and strength outcomes in response to pROM vs a traditional fROM. Pinto, et al compared two RT groups, untrained, utilizing seated machine bicep curls, for a 10-week training period. The fROM group performed elbow flexion with (0° to 130° of elbow flexion, where 0° is full elbow extension), while the pROM group performed elbow flexion (50°to 100°). Both groups showed the same muscle gain or muscle thickness (MT) increase over the training period. The fROM group showed an increase of 9.7 %, comparatively to pROM which had 7.8 % increase, though were not significantly different, meaning NOT DIFFERENT or same. However, in relation to strength outcomes, fROM showed a greater 1RM increase then did pROM above baseline values, which would support fROM as better form of ROM for strength desired outcomes. However, in regards to muscle hypertrophy, based on the data, both fROM and pROM seem to be similar. The authors make a unique suggestion in regards to pROM and multijoint resistance exercise movements stating that ‘different muscles contract at differing lengths throughout the full ROM, each of the muscle groups may not be at optimal lengths for force production. Hence, for any given joint angle, some musculature may produce their maximal force whereas others are at less than optimal length to do so’ [23]. In another study by McMahon, et al., they observed pROM vs fROM and compared muscle activation via surface electromyography (sEMG), and muscle thickness (MT) of RT exercises of the barbell back squat. They chose differing knee angles of 0-50° (SL), 40-90° (LL) SL and LL would both be considered pROM, and 0-90° (knee joint parallel with hip joint), and complete ROM (LX). One could debate that author’s definition of parallel is not fROM but that is beyond the scope of this article. Interestingly, after end of training, all groups showed an increase of MT at all points. Additionally, during the 4 weeks of a detraining period the LL group maintained their MT gains while the others did not. Furthermore, in reference to compared absolute muscle activation changes from pre and post training, no differences were found between ROM groups meaning greater or more muscle was not recruited between the groups [19]. A simplistic conclusion is that pROM is similar to fROM in regards to hypertrophic responses and does not have a diminishing effect on muscle activation when tested and may lead to assumptions that differing ROM about a joint for an exercise may be less of a factor influencing hypertrophy than some of the previous dogmas that have and are maintained.

Lastly, Paoli et al, investigated muscle activation of muscle groups involved in the military press at differing ROM. Overhead shoulder dumbbell elbow extension (military dumbbell shoulder press) to 90° (partial ROM), 135° (greater partial ROM), and 180° (full ROM), they did not state the joint angle of starting position though from the figure it shows dumbbells near or resting on deltoid. They utilized a range of intensity or load of 0 % (no weight) and 30 % (lighter weight) of 1-RM, and 70 % (hypertrophic training range) of 1RM. They attached sEMG sensors and measured the pectoralis major, anterior deltoid, medium deltoid, and posterior deltoid, upper trapezius, middle trapezius, long head of triceps, and teres minor. As expected muscle activation climbed with a greater load (70 % of 1RM), and the authors concluded that in contrast to social popular expert opinion and belief that at 70 % of 1RM showed no significant differences in all deltoid muscular activation of the anterior deltoid, medial deltoid, and posterior deltoid at a the range of 135° (greater partial ROM) and 180° (full ROM), while the upper traps were more activated with 180° (full ROM) than with 135° (greater partial ROM). Moreover, the authors concede that when utilizing a range of motion 135° (greater partial ROM) with 70 % 1RM this may maintain the deltoid activity during the movement while reducing the participation or the activation of the upper trapezius. Similarly, pectoralis major, posterior deltoid, and long head of the triceps brachii showed the highest activation for 180° portion of the ROM. The authors concluded there may be a portion of a ROM for a resistance exercise that may efficiently recruit or isolate a favorable skeletal muscle group while minimizing the synergistic or “tag team” effects of secondary or tertiary muscle groups.

So what exactly does this mean for building muscle? If a person desires to train a specific muscle group i.e. “chest” for bodybuilding and knowingly are being assessed on symmetry of their physique and this same person has much larger anterior (front) delts compared to their chest, does it make sense to continue to stimulate the anterior deltoid and further the growth of the deltoid muscle group by way of current training style? Or would it be optimal to continue with the same chosen chest exercises yet modify the ROM to reduce the synergistic “tag team” stimulus of additional muscle groups that are not prioritized in the training bout? The question seems to be rhetorical.

Non-uniform skeletal muscle hypertrophy theory is another factor that pROM may optimize or facilitate. The non-uniform hypertrophy theory, which suggests a regional adaptation of muscle and muscle fibers can be induced via RT [3]. Researchers have observed this phenomenon through EMG and cross sectional area (CSA) methods, which have been aforementioned. Narici, et al., examined the quadriceps (QC) muscle activation and CSA changes of seven healthy males during 6 months of RT on alternate days with six series of eight unilateral leg extensions (1 leg knee extensions) at 80 % of 1RM. After the end of RT study the CSA of the QC increased by in the distal and proximal regions and a smaller increase in the central region of the muscle. The average percent increase in muscle CSA of the QC areas during leg extensions were: rectus femoris (+27.9 %), vastus lateralis (+19.5 %), vastus medialis (18.7 %), and vastus intermedius (17.4 %). Meaning the rectus femoris may have received the most stimuli but definitively responded the greatest. Furthermore, this supports that there was non-uniform intermuscular hypertrophy, the rectus femoris and the vastus lateralis were observed to have the greatest hypertrophy in the distal region (near knee), while in contrast the vastus intermedius and medialis muscles exhibited the greatest hypertrophic response in the proximal portion (near hip) [3][20].

Wakahara, et al., investigated the CSA and muscle activation responses during a dumbbell press. They observed acutely the percentage of the activated area of the triceps brachii (TB) with MRI. They chose five regions of the TB via 4, 10, 16, 22, and 28 cm from the elbow joint. They then compared RT (3 d/wk for 12 wk) CSA changes (hypertrophy) of the TB were also measured by MRI, by way of using a portion of each head (long head, medial head, and lateral head). The author’s data showed that muscle activation was significantly greater in the 10 and 16 cm (mid portion of tricep) positions of the TB. Similarly, the greatest activated muscle portions were at a distance of 16 cm and of the lateral and medial head of the TB (middle portion of the tricep). Comparably, in relation to CSA it was stated that the greatest relative percentage change was found in the middle portion of the TB (10-22 cm). Essentially, this suggests that the areas of greatest activation (10 and 16 cm) concur with the middle regional areas of hypertrophic response (10-22 cm), while the least response was in the proximal region (near shoulder). Therefore, they concluded that greater relative increase in CSA in the middle region of the TB than that in the proximal regions (near shoulder) indicates that the extent of hypertrophy of the medial and lateral heads was greater than the long head. The authors believe the hypertrophic effect may be in part due to greater muscle activation and sequentially a greater mechanical and metabolic stress in the medial and lateral heads of the TB. Moreover, muscle activation of the muscular cooperative action “tag team” in a training session may be dependent on the resistance exercise choice and the anatomical feature of each component of the muscle group [29]. Therefore, if muscle activation is greater or lesser differing portions of a certain ROM, the question begs to ask is if there an optimal ROM to efficiently and optimally target a ideal muscle group while minimizing the synergistic effect of secondary and tertiary muscle groups during a given resistance exercise bout?

Skeletal muscle hypertrophy is a multi-factorial adaptation and response to resistance training, hormonal, nutrient factors to name a few. Partial range of motion is used during resistance exercises is not a novel area of training, though largely ignored and deemed incomparable to full range of motion when limited only to strength outcomes, even when there is contrasting research. Recently, new research has shown similar responses in cross sectional area and muscle thickness when compared to traditional resistance training of full range of motion. Further research needs observe and clarify a more standardized technique of partial range of motion on skeletal muscle hypertrophy by way of differing single and multi-joint exercises, optimal ranges to be utilized, muscle activation measures of these ranges, and comparative outcomes to traditional styles. If shown to be beneficial this may be a more novel technique to be utilized by those who have muscle group specific hypertrophic goals like those who may compete is cosmetic based physique competitions such as bodybuilding.

Born in Iowa and achieved a BA in Health and Sports Studies/Minor in Exercise Science, a few years later moved in Georgia completed MS in Exercise and Sports Science at Life University. Contemplated between a doctorate in physical therapy (DPT) and working on PhD in Kinesiology; chose to move to Texas work on PhD in...[Continue]