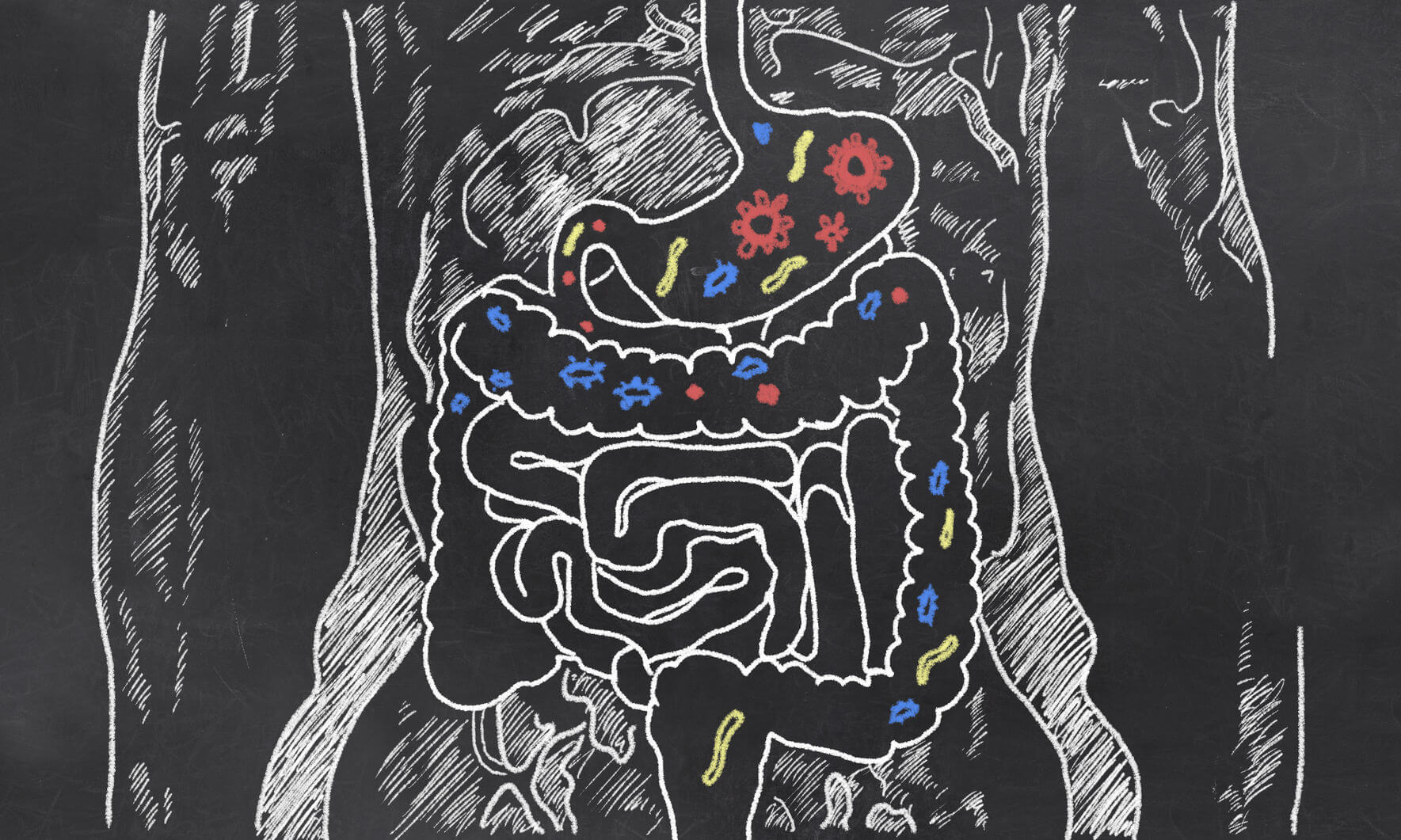 What’s the Deal with Our Gut Heath?

As health and fitness enthusiasts, we are always looking to improve our current situation and get just a little bit better. Fine tuning our diet, optimizing our training program, and ingesting the most effective supplements are just some of the ways that we care for our bodies. Up until recently, little attention was paid to the inner workings of our digestive system. As long as our stomach doesn’t hurt and things are regular, then there is nothing to be concerned about. But recent research has revealed that there is much more going on in our gut than the simple break down of the foods we eat.

As it turns out, our digestive system is home to a thriving community of bacteria that we have come to call the gut microbiome. This has prompted a worldwide investigation aimed at figuring out exactly what these gut bugs are doing inside our body. What impact do they have on our overall health and well-being? Do we have any say in how they behave? While the research on our gut microbiome is still in its infancy, there is a lot of compelling evidence that preserving our gut health may be crucial to maintaining the health of our body as a whole.

You may have heard someone say that there are more bacteria present in our gut than there are cells in the human body. In fact, early estimates put the ratio of bacteria to human cells at 10:1 [16]. While that initial estimate has been revised in recent times, it is still estimated that upwards of 38 trillion bacterial cells reside in our digestive tract [17]. Compare this to the roughly 30 trillion human cells that make up our body, and you could say that we are about as much bacteria as we are human.

Evidence we have accumulated so far points to a symbiotic relationship between ourselves and our gut bacteria. We provide them a safe environment and fuel to live off of and in return they offer several helpful services. While it may be difficult to imagine how this relationship could exist, it may not be the only example of bacterial symbiosis in our body.

Mitochondria, the energy power plant of our cells, have long been theorized to have evolved from bacteria [8]. Our mitochondria have their own DNA, a cell membrane, and replicate through simple fission, which are all traits that are shared by bacteria. Without our mitochondria, life as we know it would not be possible. So, if we likely depend on these highly evolved bacteria for our energy production, it seems very plausible that the bacteria present in our digestive system would be important to our survival as well. Diving into the specifics reveals compelling evidence for this claim.

What Do They Do for Us?

We have come to understand that these friendly bacteria actually begin working for us at a very young age. Bifidobacterium is a genera of bacteria that quickly colonizes our large intestines as babies and is thought to function in helping digest breast milk [12]. Babies lack the enzymes necessary to break down certain components of breast milk which leaves them undigested as they pass through the small intestine. Thankfully, the bacteria can then break down and metabolize these components which helps to avoid gastrointestinal issues that could occur from the undigested food [12].

This helpful process continues into adulthood as well. Even as adults we are unable to breakdown certain components of the food we eat. Specifically, we have a difficult time digesting various certain parts of plant foods which we have come to call fiber. The fiber that is left undigested in the small intestine passes into the large intestine where it is then broken down by our gut bacteria to produce short chain fatty acids (SCFA’s) [15]. These SFCA’s can then be absorbed into the bloodstream and taken to liver to be synthesized into usable energy. Additionally, the SCFA’s produced by the bacteria serve to promote general gut health by helping the bacteria fight off harmful pathogens, improving bacterial adhesion to the intestinal wall, and reinforcing the tight junctions that exist between the cells in our large intestine [7][10][14].

Perhaps the most interesting revelation we have found with our gut microbiome is the impact it has on our brain and central nervous system [5]. Scientists now recognize that there is a gut-brain axis that connects our CNS with our enteric nervous system [4]. This is accomplished directly through the Vagus nerve, as well as indirectly by way of hormones and cytokines. For example, it is now known that certain bacteria produce hormones such as serotonin, GABA, and norepinephrine, all of which can have a direct impact on our brain and nervous system as a whole [4]. Additionally, gut microbes also influence brain development and plasticity through their secretion of brain derived neurotrophic factor [6]. This all serves as overwhelming evidence that our gut microbiome has a major say in how we feel, operate, and behave.

What This Means for Our Health

To list all of the different reactions and functions that the microbiome provides would be too much for this article. But hopefully you get the picture that they serve important functions in our bodies. Naturally this begs the question, what happens to our health when our microbiome is not working well? The term dysbiosis is used to refer to a microbial environment that has become imbalanced. Indeed, the presence of dysbiosis in our gut microbiome has been linked to a laundry list of poor health outcomes. Let’s walk through some of the impact that poor gut health could have on our body:

A lot of research has gone into figuring out why certain people are more susceptible to becoming obese. Now they are finding that the gut microbiome may play a role in the regulation of body weight. One study found that the bacterial richness of the gut microbiome correlated with overall fat mass, insulin sensitivity, and weight gain over the studies timeline [11]. This means that those who had less bacteria in their gut were more prone to becoming obese compared to those who had more bacteria. Other studies done in animals have shown that having certain types of bacteria present in the gut may influence the adiposity of the host [18].

Given the apparent existence of the gut-brain axis, it is plausible to make an assertion that our gut health could impact our brain in a way that could promote or prevent depression and anxiety like symptoms. We know that upwards of 90% of our serotonin is produced in the gut with our gut bacteria either producing it or directly influencing its production. This is one of the main hormones that is imbalanced in those who suffer from mental disorders. Studies done in animals have shown that probiotic intake is able to reverse heightened anxiety that is brought on by gastrointestinal inflammation and dysbiosis [1]. Although few studies have been conducted in humans, the results have shown similar anti-depressive and anti-anxiety benefits of probiotic supplementation [13]. These studies suggest that poor gut health could contribute greatly to our mental healthl.

The topic of inflammation has become a hot button for many health experts today. Whatever point of view you wish to take with regard to inflammation, we can all agree that chronic inflammation is not a good thing. This symptom is present in nearly every chronic disease that our society suffers from today.
As mentioned above, GI inflammation has been implicated in anxiety and depression via the gut-brain axis, and that changes to the gut microbiome can potentially reverse these symptoms. However, dysbiosis can also result in abnormal inflammation in other areas of the body as well. This is accomplished primarily through permeability on the lining of the intestines.

The bacteria in our gut produce SCFA’s, which have a direct impact on the integrity of the tight junctions which hold together the cells of our intestinal lining. Under normal conditions, these tight junctions prevent passage of any unwanted material into the bloodstream. However, if these SFCA’s are not being produced (as is the case in dysbiosis), the tight junctions are not as robust and material will leak into the bloodstream, which results first in an immune response and later in an inflammatory response. Several studies in animals have found that changes in the gut microbiome are directly related to intestinal permeability and resulting inflammation [2][3].

Infiltration of adipose tissue with immune cells and cytokine release are part of the inflammatory response and have been linked to diseases such as diabetes, Alzheimer’s, and heart disease [9]. While this is not direct evidence that dysbiosis causes these issues, it certainly seems to be a step in the cascade of events that could eventually lead to disease.

It seems that we have just begun to scratch the surface in understanding exactly how our gut microbiome operates. Gut health is actually a concept that was theorized many years ago but was impossible to study until recent technological advancements. Therefore, the information we have available is still in its infancy compared to what we will likely learn in the future. What we do know for certain is that our microbiome seems to perform many tasks we have grown dependent upon. The exact interplay between the types, amount, and ratios of different bacteria in our system is not yet known. However, there is good evidence to suggest that the care that we take, or lack thereof, with preserving our gut health can have profound consequences on our overall function and well-being.