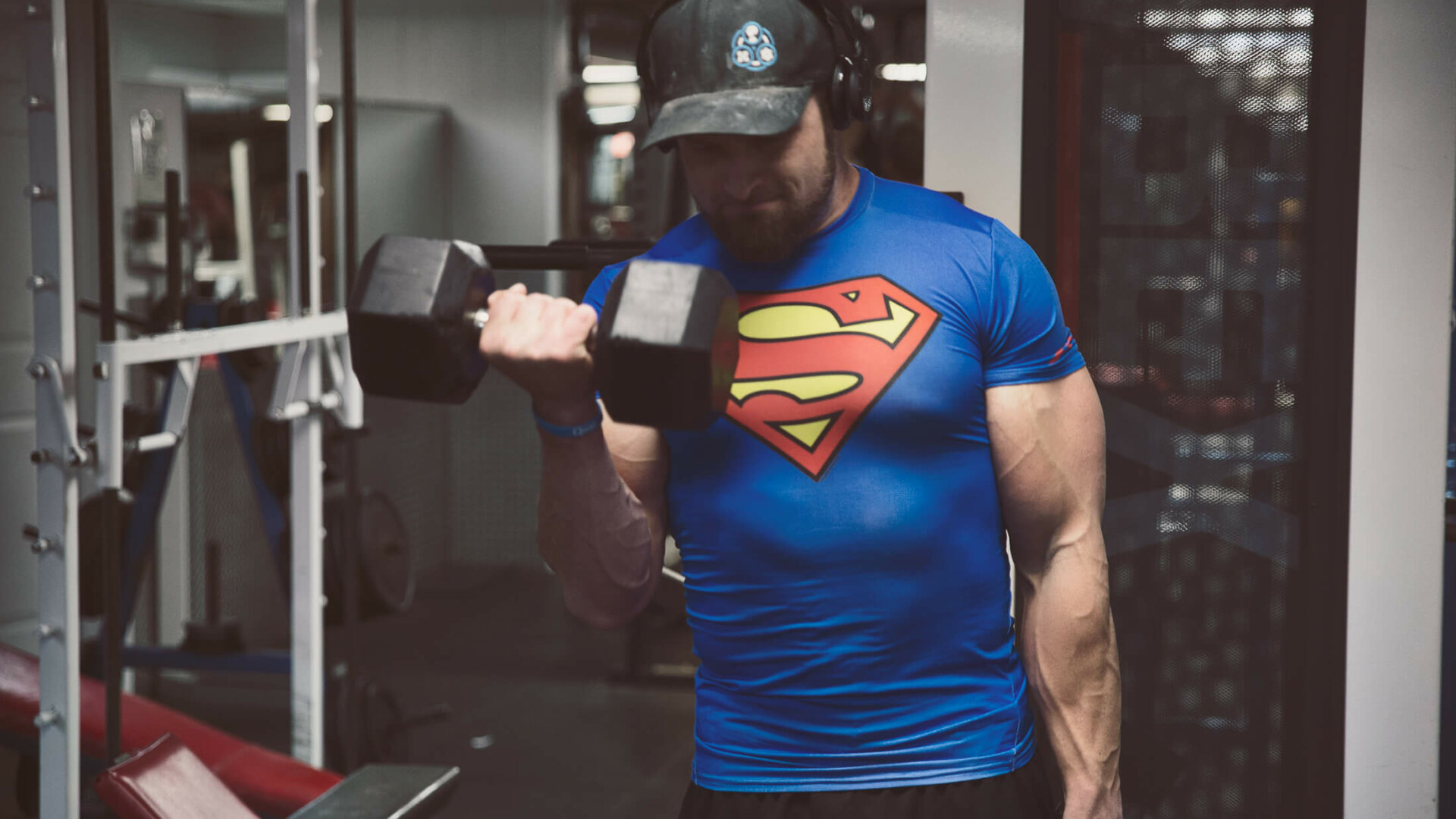 Rep speed probably isn’t something you think about too much.

We’ve all got our inbuilt velocity monitors, and for most of us, we tend to lift in a relatively explosive manner, then lower under control. Sure, we probably change things around a bit by powering through our warm-up sets and lifting quickly, and likewise, when we’re grinding out reps or working with a higher percentage of 1 rep max, the bar’s going to slow down.

Everyone’s experimented with tempo to some degree, and probably tried out super slow training to “feel the burn” from time to time, but more often than not, we’re focused on the weight on the bar, and the total number of sets and reps.

Is tempo something we need to look at a little closer though? And could using tempo as another variable in your training be an effective way to bring about greater gains in hypertrophy and strength?

Tempo refers to how quickly you perform each section of an exercise.

The first number is the eccentric (lowering) phase, the second is the pause, the third is the concentric (lifting) phase and the final number is the break or the contraction before performing the next rep.

For example, a leg press with a 3:2:1:1 tempo would mean you take 3 seconds to lower the weight, pause for 2 seconds, lift for 1 second and pause for a second at the top. Occasionally you’ll see “X” listed which means no specific tempo, or indicates you should be explosive.

Tempo can have an impact on all three of these.

In terms of volume, using a different tempo can take this up or down.

Let’s say you’re squatting 225 pounds and at a regular rep speed, you can hit 10 reps. If you suddenly switch up your tempo so you’re taking 4 seconds on the eccentric and the same on the concentric, there’s no way you’ll still get those 10 reps. You may only be around 4 or 5 reps.

To combat this, many proponents of slow tempo training prescribe lighter weights but higher reps. This may then increase volume (if the increase in number of reps outweighs the decrease in load lifted.)

They may drop to 135 pounds and be able to do sets of 20 at the slower tempo.

On the face of it, that appears superior, but when it comes to performing more reps at a lighter weight to increase volume, the response isn’t linear. You reach a cut-off whereby the load lifted isn’t a significant enough percentage of your maximum to really cause adaptations in the muscle fibers.

This is where slower training falls down in a big way.

It’s the same for muscle damage and metabolic stress. While they do both matter when training for hypertrophy, they aren’t the be all end all, and if load isn’t significant enough, all the reps in the world won’t create a hypertrophy response.

It’s true that when using a slow tempo, you probably will feel the burn and sense your muscle working more than if you were to do a regular tempo movement.

This might be beneficial for hypertrophy. A 2001 study from the “Journal of Sports Medicine and Physical Fitness” found that super slow training (10 seconds lifting, 4 seconds lowering) was an effective way to increase strength in middle-aged and older adults. [1]

If mechanical tension and metabolic stress are higher when lifting slowly, and you get a better mind muscle connection, while this in itself isn’t a reason to perform super slow training, it does mean it shouldn’t be completely dismissed.

Clearly, the study above used un-trained subjects however, so they’d have most likely progressed on any kind of weight training program.

As abused as the word functional is, it still comes into play.

The functionality of an exercise depends on the circumstances, and any exercise can be functional if it relates to an athlete’s goals. However, super slow training really comes pretty low down the functionality spectrum, as there are very few instances in sport, or even in everyday life where you’ll be required to move at a snail’s pace.

What the Science Says

On the whole, the science tends to support the notion of lifting explosively, or at least of avoiding super slow training.

A 2012 study from the “Journal of Strength and Conditioning Research” concluded that low load high velocity training may bring about better muscle adaptations than high load, low velocity training when volume was matched, due to the higher force, power, time under tension and work output. [2]

In fact, on the whole, studies seem to give far greater backing to a normal or explosive tempo in terms of muscle activation, [3] energy expenditure [4] and lean body mass and body mass index. [5]

Powerlifters have long been saying for that by focusing on moving the weight as quickly as possible, you recruit more muscle fibers and therefore lift more weight, and so it makes sense that if hypertrophy and strength are your goals, you need to focus on moving the bar quickly.

Not so Fast (Literally)

Just because the data seems to say that you’re better off lifting explosively doesn’t mean to say that every single rep should be performed quickly.

In terms of the concentric portion of a lift, then the instances where you’d benefit from lifting slower are extremely rare, though it could be used to allow you to train and still inflict metabolic stress and muscle damage if you’re injured, and need to create an effect with lighter weights.

The eccentric section of a lift has greater potential for muscle damage. Seeing as this is one of the hypertrophy mechanisms, there may be a case for lengthening the time spent performing an eccentric, provided that this doesn’t negatively impact volume.

There’s also definitely a time and place for slower eccentrics and for pauses in movements from a technique standpoint.

Let’s say you’re squatting close on your 1-rep max. While you want to attempt to lift the weight as quickly as possible on the concentric, and going too slow will almost certainly cause you to fail, going too quickly on the way down could screw you over too.

If you descend rapidly and lose tightness, you won’t be able to engage your glutes and hamstrings, your weight may be thrown forward, your knees will cave, and you’ll get pinned in the hole. Olympic weightlifters may be adept at using the stretch reflex response and bouncing out of the bottom position, but it’s a risky maneuver for most, and a bit more care and caution with a slower descent will allow you to maintain control and tightness.

Pauses can be incredibly useful too, particularly when it comes to the big three. A stalling bench press can be ramped up by including 2- and 3-second pauses in your training, while paused squats aid with glute and hamstring engagement and paused deadlifts are a great cure for being pulled out of position or if you’re a victim of thoracic rounding.

Should You Care About Rep Speed?

Probably … but not too much.

You can’t go wrong with performing every rep with a controlled eccentric, and a powerful concentric, provided you’re still maintaining good form and not confusing “explosive’ with ‘sloppy.”

There’s no need to go slow on any of your strength work, or your compound free-weight stuff.

A 2015 study from Schoenfeld, Ogborn and Krieger concluded that –

“From a practical standpoint it would seem that a fairly wide range of repetition durations can be employed if the primary goal is to maximize muscle growth. Findings suggest that training at volitionally very slow durations (>10s per repetition) is inferior from a hypertrophy standpoint, although a lack of controlled studies on the topic makes it difficult to draw definitive conclusions” [6]

That said, occasionally throwing in some slower tempo stuff for isolation workout isn’t a bad idea, and can be used as another variable to maintain progressive overload on accessory exercises. Moving from 3 sets of 12 biceps curls with 35 pound dumbbells and a tempo of 2:1:1:1 to the same weight, sets and reps but a tempo of 3:1:1:1 is progress, as you’re increasing time under tension.

The same can be said for adding in some slower eccentrics and pauses to get a bit more of a pump. It might not matter as much as total volume, but it’s something worth playing around with.

So rep speed certainly isn’t as vital as guys like Mike Mentzer and Fred Hahn make out, and super slow training is almost always a bad idea, but tempo in itself is yet another variable you can use to keep seeing gains in size and strength.