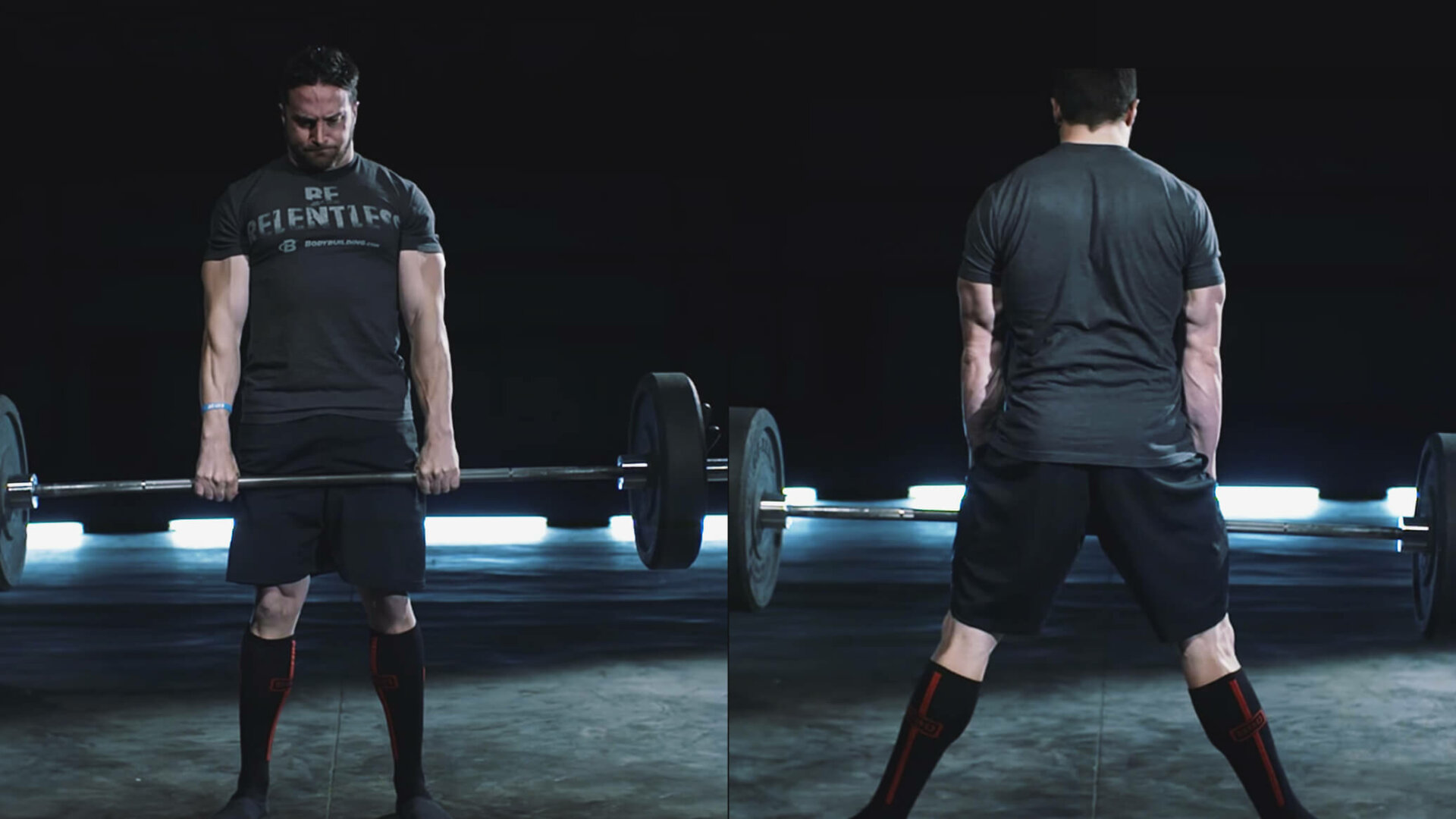 Sumo vs. Conventional: What’s Best for You?

In fact, probably even more regularly for some of the less hygiene-conscious guys out there.

One session they’ll be pulling conventional, then they’ll go home, watch a video of their favorite YouTuber, or get started talking to a powerlifter in the gym, and Deadlift session rolls round again, then they find just don’t jive with the wider stance approach, so go back to their first choice again.

And the cycle continues, all the while they stay stuck exactly where they are, never getting enough frequency or volume on one style to make any meaningful, tangible progress.

It’s easy to assume that changing your deadlift style based on the latest research and what the strongest guys in the world are doing is the way to ‘fix’ a crummy pull. Or think that if you’re at a plateau, it MUST be because you’re using the wrong technique.

Getting stronger and making progress on your deadlift really doesn’t have much to do with what stance you use – it all comes down to getting consistent time with the bar, using a smart, periodised approach to your training, and consistently implementing progressive overload.

But leaving it there would make for one boring article.

So with that in mind – the type of deadlift you opt for does matter, and there are several key factors to take into account when picking which one to use.

If it Ain’t Broke, Don’t Fix It

A deadlift is a deadlift.

Provided the lift starts with the bar on the floor, and you lift it in one movement, with no downward momentum and no hitching, to the point where you’re standing with your knees, hips and shoulders locked out, that’s a deadlift.

Whether you’ve got your feet so close they’re virtually touching each other, or your stance is so wide your toes are nearly making contact with the plates doesn’t matter all that much. If your lift conforms with the above guidelines, it’s still a deadlift.

(Side note: Strongman competitions don’t allow sumo deadlifts, but do allow straps, while powerlifting is the opposite – you can go sumo or conventional, but straps are banned.)

Whatever deadlift you’re using at the moment though, if you’re making progress just fine, aren’t getting any undue pain and discomfort and your form is solid and safe (even nearing the upper limits of your max,) there’s no need to change what you’re doing.

The Benefits of Sumo

In terms of what muscles you’re working, your hamstrings take much more of a hammering when you lift with a sumo stance, and plenty of lifters prefer sumo for the glute-building benefits. You’re going to find your adductors take a beating too, especially if it’s your first time with sumo, or you go super wide.

From a biomechanics point of view, sumos usually work better for those with less than optimal lower-back mobility and strength.

i.e. if you have the flexibility of a broomstick caked in cement, then sumo is probably a wiser choice than conventional. It’s easier to keep a neutral spine here too, as you start with your back in more of a vertical position, so there’s less shearing force.

Finally, (and this is the reason why plenty of people go mad for the sumo style) is that the range of motion is shorter. In theory, that makes the lift easier – the shorter distance you have to move a load, the more weight you’ll be able to shift.

That’s a lot of thumbs up for deadlifting sumo. So is it an open and shut case?

The Benefits of Conventional

Think about any sport where you need to run, jump and leap, be that basketball, football, soccer or sprinting – how often do you use a wide stance?

It could be the fact that I’m not the world’s biggest sports buff, but I can’t think of many.

Therefore, if you’re competing in a sport, and one of your aims is to get more powerful, or, to use that hated, but in this case pretty appropriate phrase – ‘get more functional’ then the conventional pull is your friend.

Just as sumo were the winner in terms of hitting the hamstrings and adductors, conventional are the clear choice if you want to build a rock-hard lower back, and get erector muscles that resemble galvanized steel pipes.

While we said sumo deadlifts were often easier from a low-back mobility standpoint, and many newbies struggles to get into a low enough position for conventional without some serious lumbar rounding, if you’ve got tight hips, then you’ll probably be best served sticking to conventional deads.

If you find that both your lower-back AND hip mobility aren’t up to scratch yet, then work on that while you implement conventional block pulls, or even trap bar deadlifts.

So How Do You Choose?

This is going to come down to a few things –

When talking nutrition and programming, the reasoning of ‘it works for me’ usually isn’t good basis for any claims or recommendations, and people often succeed in spite of what they do, not because of it.

In terms of deadlift biomechanics though, if something feels okay and you can lift safely and efficiently doing it, then this is your best option.

Let’s say you’ve been lifting conventional for years, and you read this article, or another bestowing the benefits of sumo deadlifting – should you change your technique there and then?

As we said right back at the start – if it’s not broken, don’t fix it. Comfort is going to be your first port of call on your deadlifting style checklist.

Next up is biomechanics.

In a 2010 study published in The Journal of Strength and Conditioning, the researchers analysed the length of lifters’ torsos, arms and legs to see what type of deadlift they were best suited to.

You can try this for yourself. You’ll need to measure –

You then need to compare the first 3 with your height:

Depending on how you stack up, here’s what the study says you should do:

Pick sumo if you –

Pick conventional if you –

Or pick either if you –

Again though, be smart with things.

If you’re just getting started with your training, have never deadlifted consistently, have no immediate powerlifting or strength goals, or you’ve been feeling completely and utterly stuck with your deadlifting recently, then picking a style based on biomechanics isn’t a bad idea.

However if you’re mid-training block, have a competition approaching, and have generally been getting on just fine, stick with what you’ve been doing.

If you’re a born and bred conventional puller, should you program in periods of sumo deadlifting, or even have them as an accessory?

Or, if you’re a member of the wide stance, narrow grip brigade, is throwing in the odd set of conventional pulls going to have carryover to your normal style?

There are definitely benefits of including both in your program. For instance, you’ll probably build a more balanced physique. Adding in sumos as a conventional deadlifter will give your lower-back a break, while sumo guys and girls who try conventional from time to time will reduce stress on their hips.

That said, you still need to adhere to the laws of specificity. If you want to get better at something, you should spend them majority of your time doing that one thing.

My advice – don’t try to improve, or go heavy on both at the same time.

If you want to program in sumos and conventionals, then either give them their own separate training blocks, or make one your main focus for 4 to 8 weeks, while using the other as a lighter accessory move, where you don’t go much above 80% of your 1-rep max, and always stay a couple of reps shy of failure.

And the Winner Is …

There’s definitely no winner between sumos and conventionals.

There’s definitely a right and wrong way, and any deadlift that has you lifting with a rounded lower-back, your knees and shins shooting forward, or ugly-ass hitching is definitely, completely, 100% wrong.

But if you’re using good technique, generally not getting too beat up or feeling irregular soreness, and your deadlift is gradually going up, then there’s no right or wrong choice between sumo pulls and conventional.

Biomechanics do matter, but what matters more is your own personal comfort and progress, so don’t be swayed into switching just because ‘experts’ are telling you to.